On Thursday November 9th, 2017 Barbara Worrall of the Latchford History Group a local non profit making group who meet at St Hildas Mission Hall, Slater street, Latchford gave a most profusely illustrated talk on Warrington  "South of the Mersey" being "Bridge to Bridge". Warrington Bridge to Latchford Bridge.
The troubles and development of a 'border community' at a river crossing; first by a ford and then by a bridge with rival family feuds as tolls were lost by one family and gained by another; with subsequent development by many criss-crossing canals, railways and roads to take folk from and to the industries and surrounding markets and towns was illustrated with old maps, many photographs and the personal feelings of belonging to Latchford.
One highlight was the information that the first Sunday school in England came about as a result of the activities of a Latchford minister. 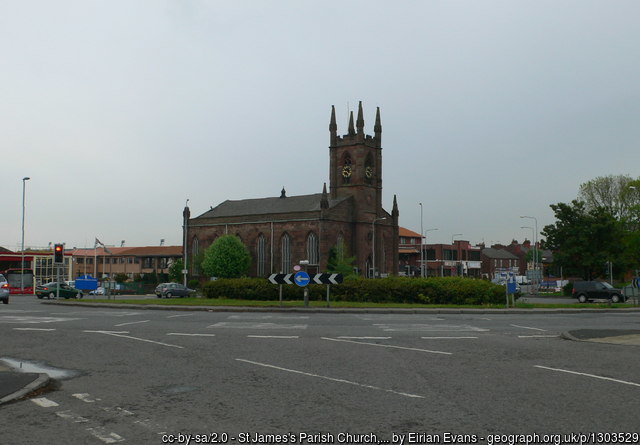 Latchford once a large township south of the River Mersey in the county of Cheshire is now a substantial part of the County Borough of Warrington. The ancient ford, whereby the crossing of the Mersey was made possible before the first bridge was built, was the origin of the name Latchford which means ‘a ford over the lacce or stream'. Every traveller going north or south in the area would have had to pass through Latchford to cross  the ford as there was no other crossing over the Mersey. 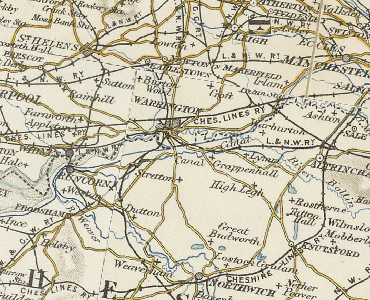 Early map showing the development of the railways with industrialisation.
The manor south of the river belonged to the Boydell family who had the right to charge tolls to cross the ford. The manor north of the river belonged to the Botelers. By 1185 the Botelers built the first bridge over the Mersey and were granted the right to charge tolls to cross it. This caused years of conflict between the two families.
By 1485 the Earl of Derby had a new bridge built over the river to allow the King Henry VI1 to pass over on his route north. The Earl left money in his will to maintain the bridge and to free it from all tolls. During the next two centuries little change took place in the area, it remained in the Parish of Grappenhall and was mostly agricultural until the 19th  century. The Earl of Derby had the two major thoroughfares through Latchford greatly improved. The roads to Stockton Heath and Knutsford were built as causeways to raise them above the frequent flooding of the Mersey.
Thomas Patten a local industrialist in Warrington felt he could increase his trade if the river, already navigable as far as Warrington, could be made navigable to Manchester. His plan agreed, in 1721 the course of the Mersey was changed, cutting out the loop where the ford had been, and building a weir and lock further downstream in Latchford. The changes, together with the Woolston Cut, allowed traffic on the river to reach Manchester.
In 1770 'The Bridgewater Canal was built along the southern boundary of Latchford. By 1804 the Old Quay Canal was in operation dividing the area in two from north to south.
Population increased as new industry was established by the river. The majority of people resided near Warrington Bridge. This area then still in the parish of Grappenhall had its first chapel of Ease, St James built by the river in 1777. It was in this church that the Rev James GIazebrook opened the first Sunday School in the country. A photo of the church is above. 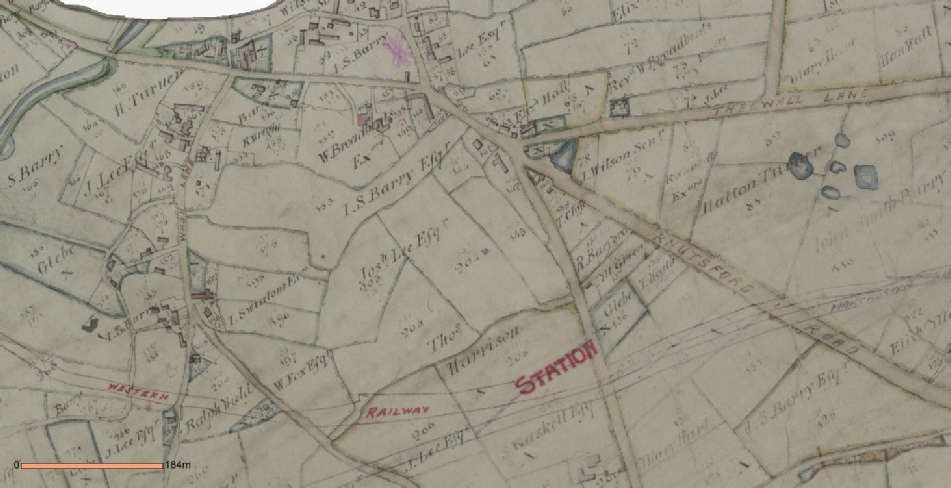 The map shown on Latchford History Group website, showing the beginning of the railway disruption.
Link to Latchford  History Group web page:
Latchford History Group Website
The land upstream of the new weir was the private estate of the Old Warps, the 52 acres was used mainly for farming. By 1897 the estate having been purchased by the Warrington Borough Council for £10,000 was opened to the public as Victoria Park. The House on the estate has been a maternity home, and a nursing home. It is currently run as the Spirit Restaurant.
The Old Quay Canal helped to provide transport by barge to enable the development of several tanneries in Latchford. Such was the demand for leather goods. Latchford Tannery belonged to the Broadbent family who lived at the Hollies, a large mansion on Knutsford Road. It was demolished in the 1960s to make way for the dual carriage improvement scheme. Raddon Court Tannery belonged to the Reynolds family, who had other tanneries in Warrington. The mansion Raddon Court also stood on Knutsford Road. It became a Red  Cross Hospital during the first World War. It was purchased by Greenall Whitley but was demolished in the 1940's. 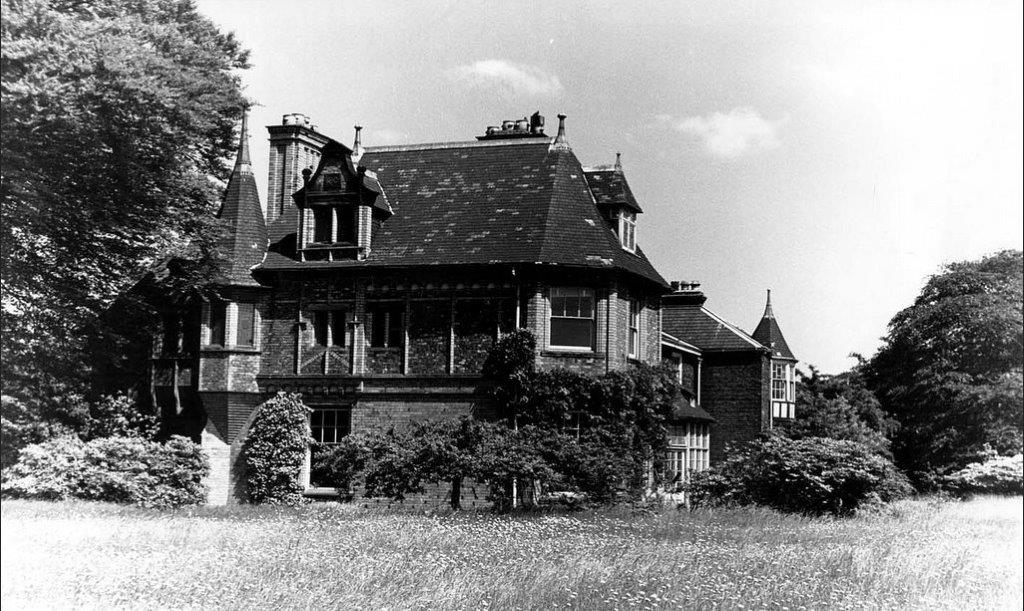 The Hollies, courtesy of Barbara Worral
Latchford had originally been a separate township but in 1847 the Warrington boundary  was extended to include Latchford and it became a municipal borough with William Beamont who lived at Rock Villas in Latchford, as first Mayor and with the continued expansion and growth of population a second Church of England, Christ Church, was  built in 1861 on land given by Thomas Greenall.
Significant changes to the area were made by the building of the Manchester Ship Canal completed in 1894. It was able to carry goods straight into Manchester instead of   offloading in Liverpool and then having to be transported by land into Manchester. It ran  through the heart of Latchford dividing it once more. South of the canal was then put into Cheshire and  renamed Latchford Without until 1938.
The red line in the diagram below was the boundary of Cheshire.

Then it was divided between  Grappenhall and Stockton Heath. The railway was lifted over the canal and the new
Latchford Station had to be elevated on the new embankment leaving the old station disused.

Manchester ship canal (blue line) and Bridgewater canal (red line) diagram.
Many properties had to be demolished, roads were severed or re-routed and swing bridges were put in place on the main thoroughfares. Latchford Locks, built to raise the water level in the canal, remains as a lasting landmark; these give a route for walkers and cyclist to cross the canal. 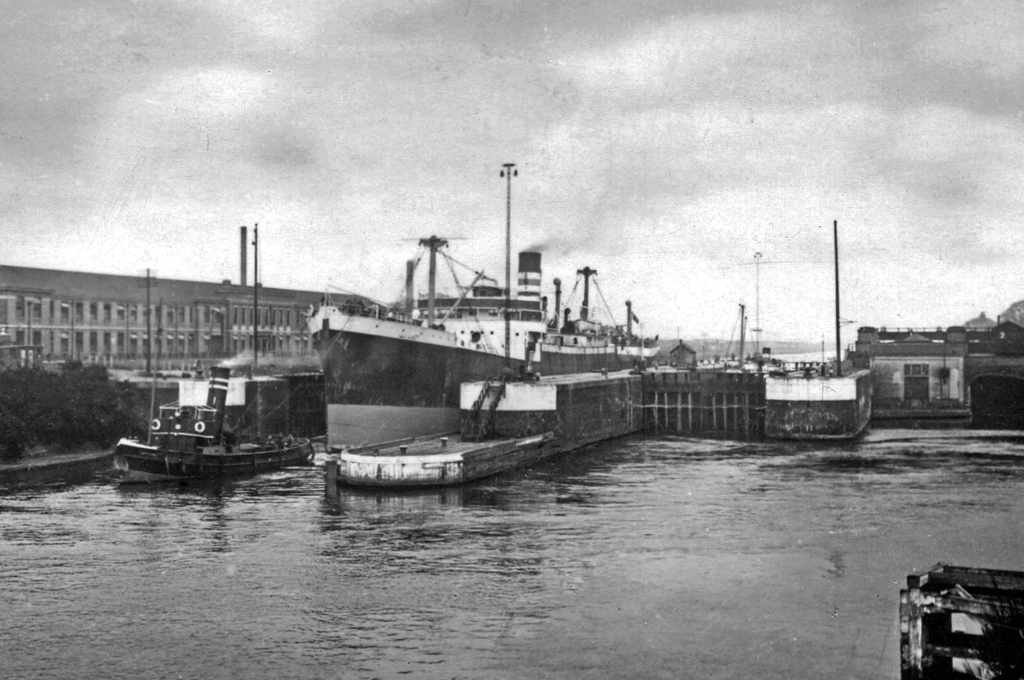 During the twentieth century there was huge development in the area, a new bridge  crossing the Mersey was built plus the Westy council housing estate, the development of a  retail village in Latchford close to the Swing bridge, better schooling and jobs created by large industries such as Richmond's Gas Stoves and the British Aluminium.
The road from Warrington Bridge travelling south is Wilderspool Causeway. Initially it  led to the small hamlet of Wilderspool then onwards to Stockton Heath. There was a  branch to the west being the route to Chester. From the bridge there was an array of shops,  public houses and small factories. In 1829 a new Church for St James had been built  along the road and subsequently further industries including Greenall Whitley’s Brewery and Fletcher Russells. The road to Stockton Heath which was once quiet with open fields to the west and the river to the east became a bustling thoroughfare. With plans to make a large port leading from the Ship Canal, which never materialised, the river was once again re-routed from behind the Causeway further to the west alongside the Chester Road. 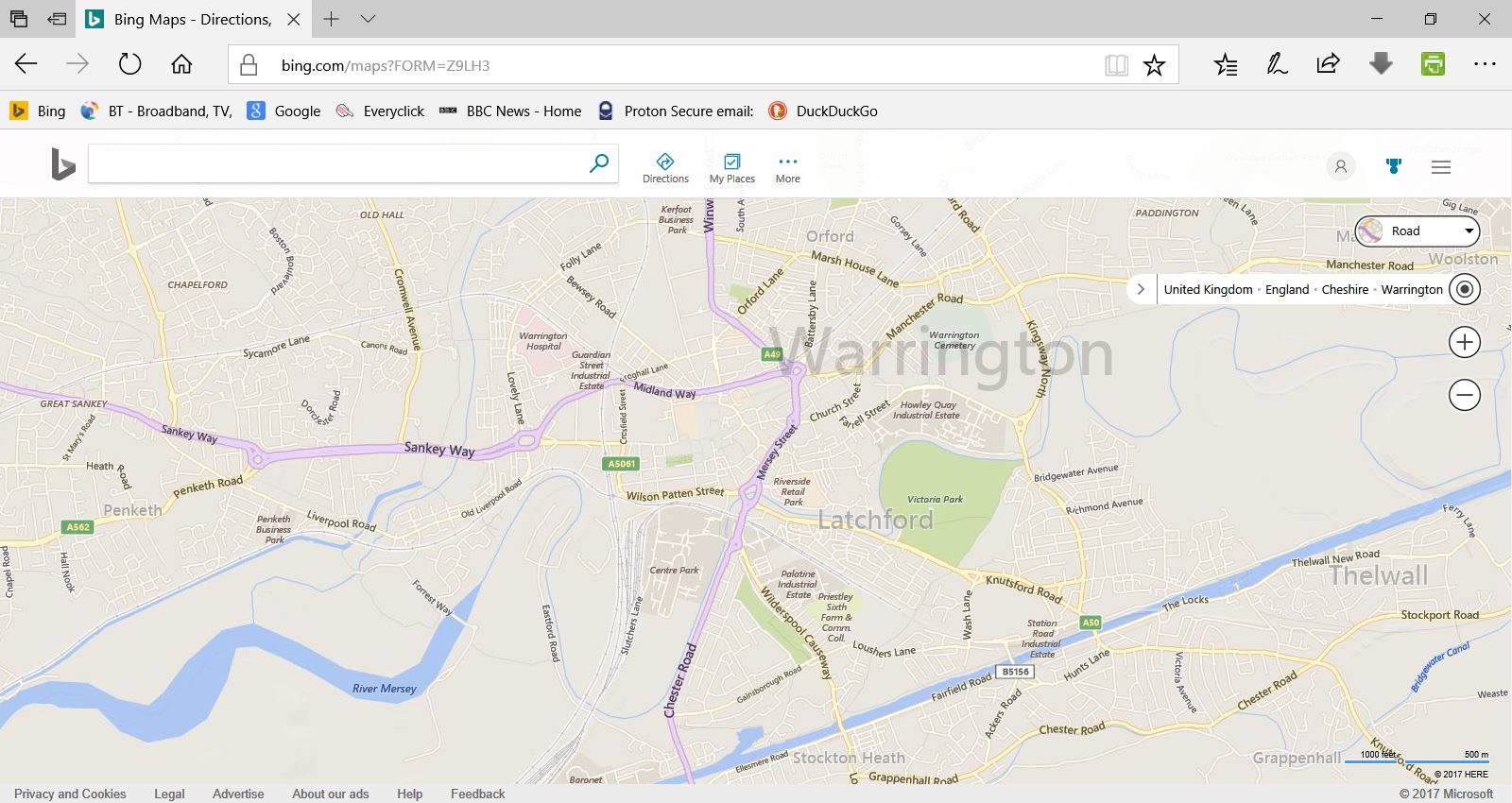 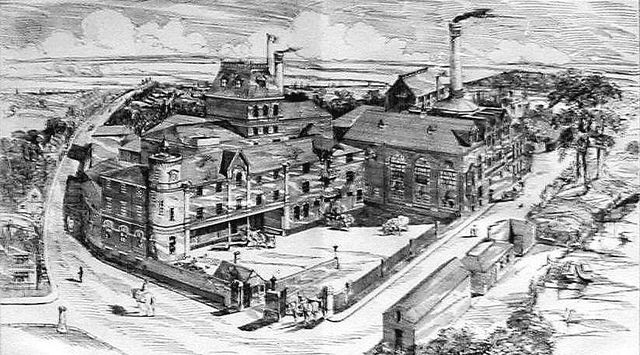 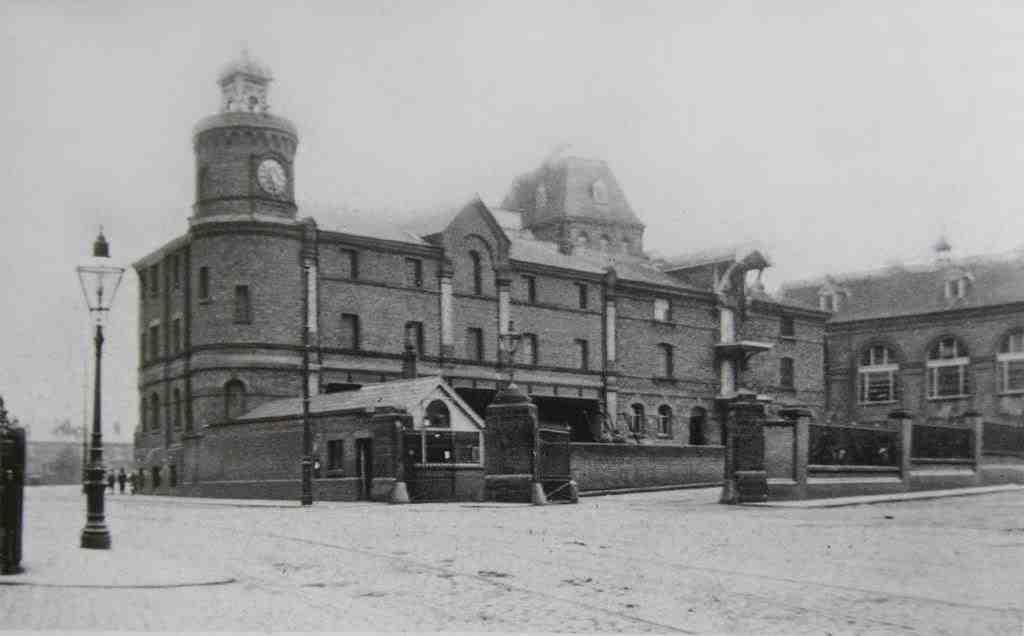 The Greenall Brewery_courtesy of B Worrall 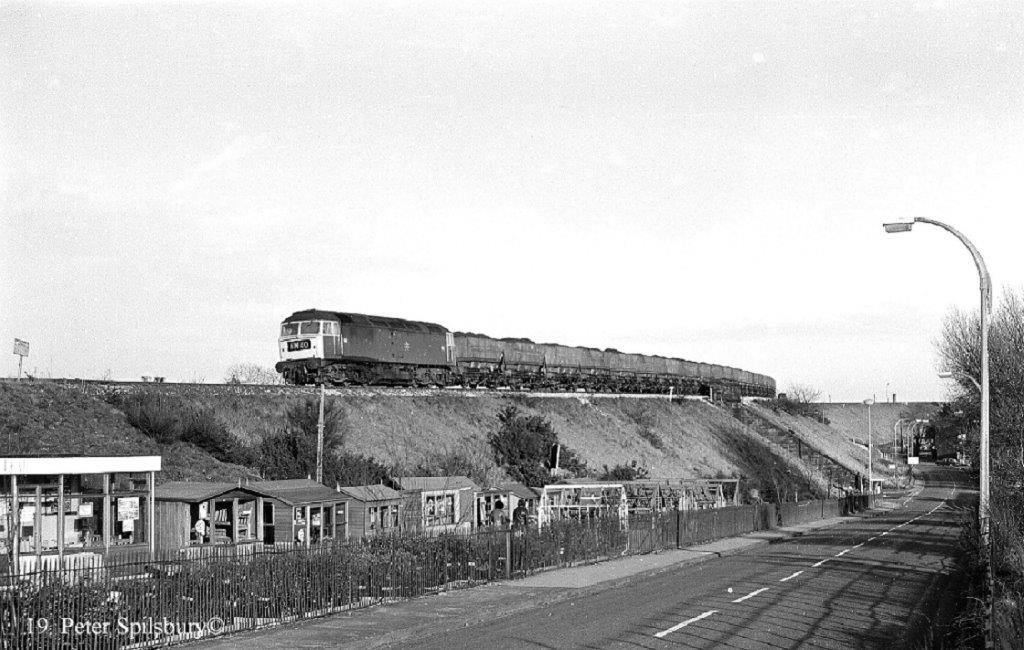 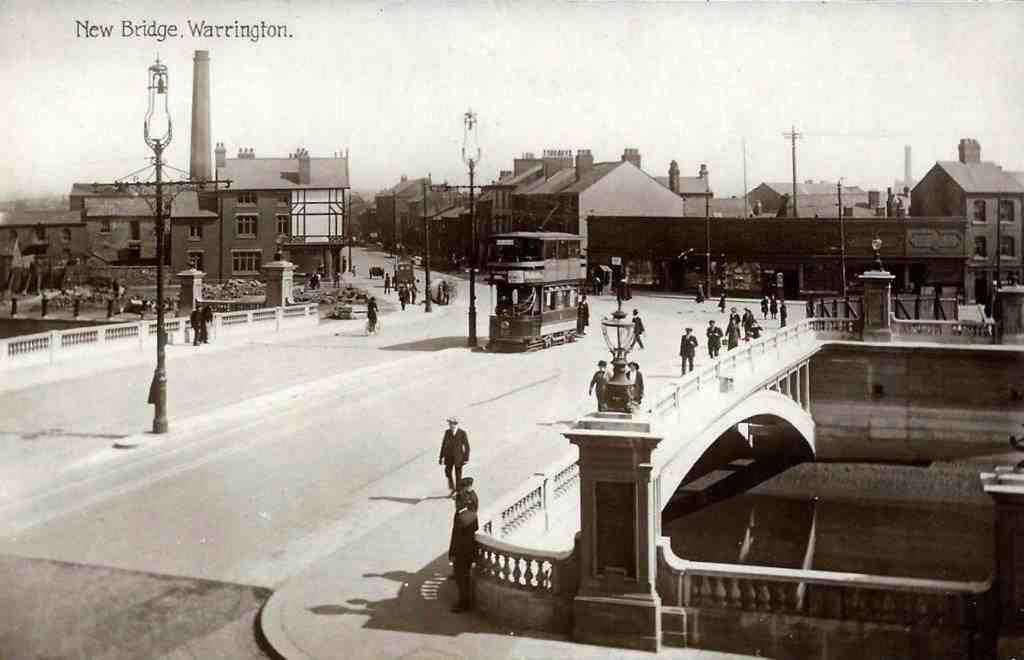 Courtesy of  B Worrall Warrington Bridge with perhaps Cenotaph construction in 1920s
See bridge with another view including finished Cenotaph further below on page. 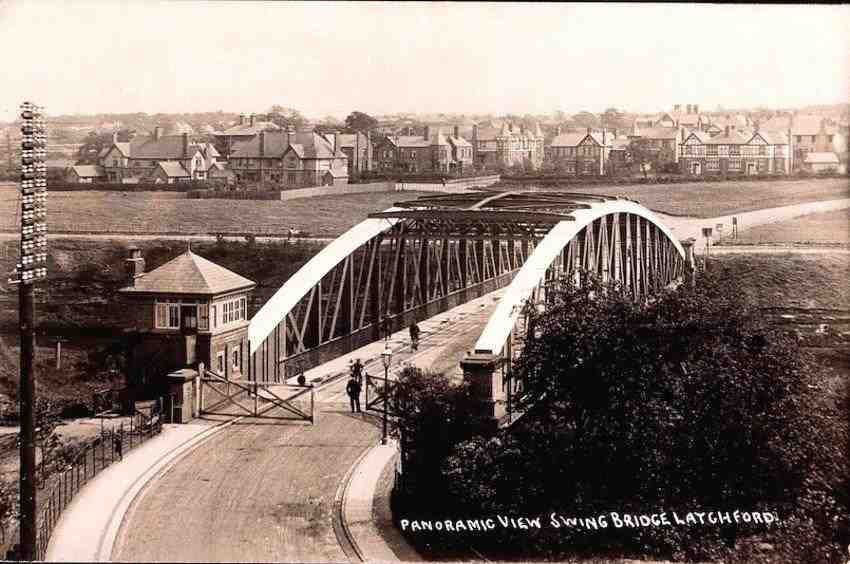 Courtesy of B Worrall View from Railway Bridge c1900.
Gates to avoid vehicle or person entry when swung open to allow ships to pass. 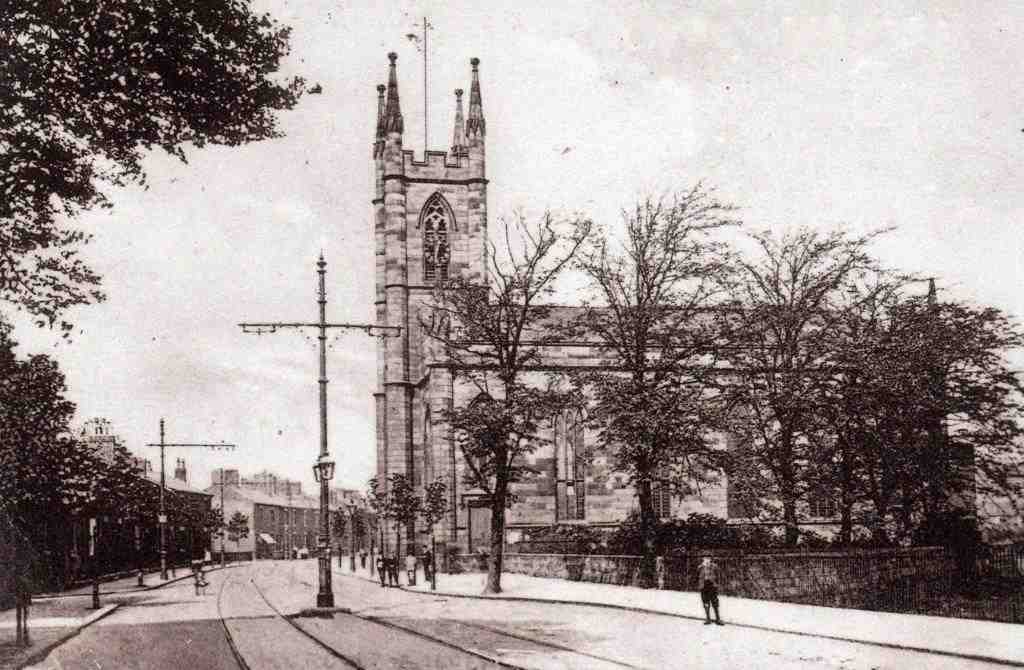 Courtesy of  B Worrall St James Church in another view. 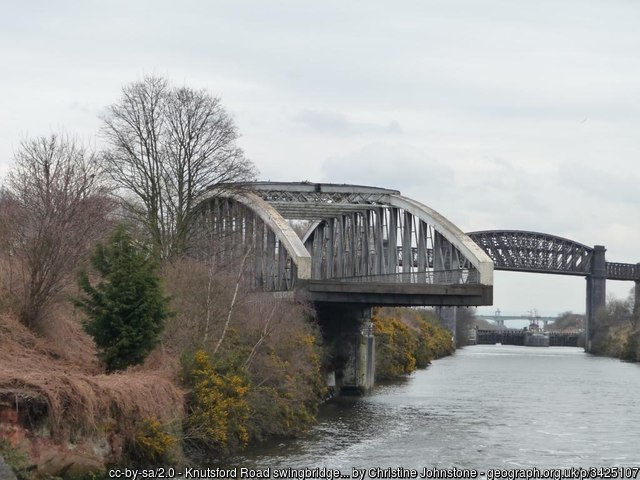 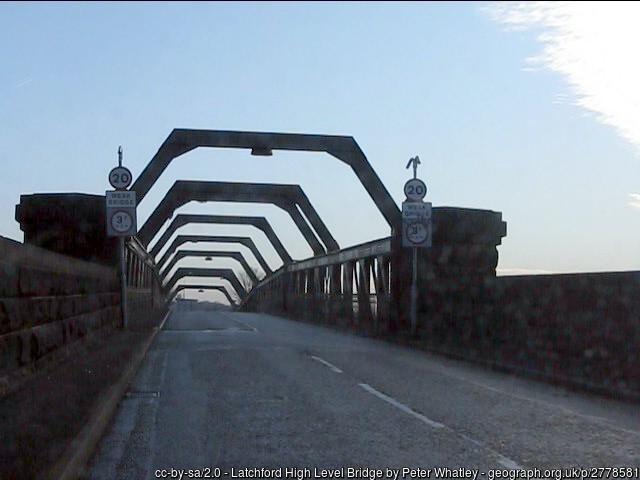 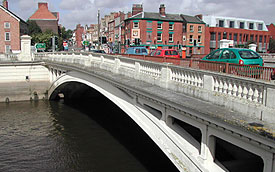 The Warington Bridge with finished Cenotaph.

.
Associated engineer: Webster & Fitzsimons: date 1909 - 1915
era: Modern category Bridge reference SJ606878; ICE reference number HEW254
photo: Paul Dunkerley
The bridge over the Mersey at Warrington, which is still tidal at this point, is the first British bridge to commence a construction type that incorporated reinforced concrete hinges in its design.
The first bridge on this site was in place in 1305. The current bridge is the sixth on that site..
Its reinforced concrete hinges, by Considère Constructions, are located at the mid spans of its eight 134ft reinforced concrete parabolic arch ribs.
They took a total thrust of some 240 tons during construction.

A new bridge was constructed 70 yards upstream of the 'Sixth Bridge' to take the southbound traffic of the A49 and Warrington Bridge now takes the northbound traffic.
This accounts for the complex crossing where central Warrington meets the Mersey. 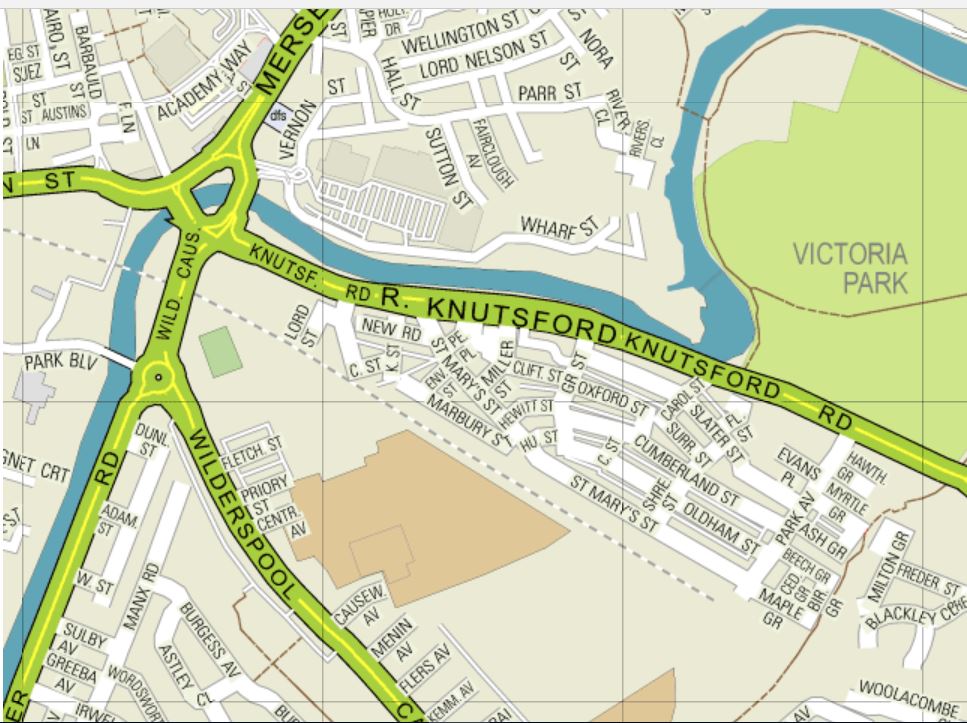 Stockton Heath being on the heath land had no threat of flooding. It developed with a better class of housing stock than was evident in Warrington. It was edged to the south by the Bridgewater Canal which from 1770 had brought business and people to the village. Many non-conformists came to the village and opened several chapels in the area for worship including the Baptist chapel at Hill Cliff. By 1868 St Thomas's Church was built complete with a peal of bells and clock.
Grappenhall still retains its old village atmosphere with St Wilfred's Church at its heart. a primary school, two pubs and cobbled street. It has almost certainly been saved from further development by the small and narrow access bridges over the Bridgewater canal.
Walton is still a rural area. It includes the Walton Hall estate, once owned by the Greenall family, it is  now run as a public park by the Warrington Borough Council. Next to it was the mansion and estate owned by the Crosfield family called Walton Lea.
Thelwall to the east of south Warrington again remained rural, being a farming community. The manor belonged to the Pickering family for many generations. many large mansions were built in Thelwall by industrialists from Warrington. The digging of the Manchester Ship canal changed the area taking away a loop of the Mersey close to the village centre.

Disruption and division of being a 'boundary community'.

The south of Warrington has been dissected by three man made waterways, one natural river, which changed its course either naturally or by man's intervention.
This has resulted in that today when we (the people of Latchford) venture out we usually have to travel from bridge to bridge to get anywhere.
Text of this article is by Barbara. Worrall.  November, 2017 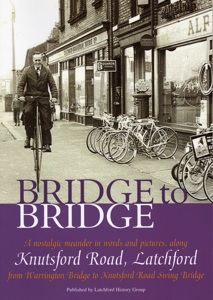 Book Title " Bridge to Bridge".
The above "Bridge to Bridge" book and other books on Latchford history are available from the publishers: the Latchford History Group, a local non profit making group, who meet at St Hildas Mission Hall, Slater Street, Latchford.
These books contains high quality pages of historical information and photos, invaluable to anyone researching Warrington history.
The books can be obtained from the following members of the Latchford History Society:-
Joan Howard  01925 650340.
Brian Mercer 01925 838071.
Linda Pearson 01925 602803.
Barbara Worrall 01925 266282.
LATCHFORD HISTORY GROUP
http://www.latchfordhistorygroup.co.uk/
The group meets every Wednesday at 10 am to 12-0 noon at St Hilda’s Mission Hall, Slater Street,  Latchford,  Warrington.

Many of the diagrams, photographs and artifacts about Latchford were displayed on display boards which were available to our members and visitors to inspect at our meeting and these generated many interesting comments and side chats

The Culcheth Local History Group thanks Barbara Warrall for her kind answers to our questions and the high standard of her presentation.