Illustrations source and all copyrights acknowledged.

On Thursday evening the 9th of May 2019, the thirty six members and visitors were  enthralled by a very professional and well researched talk on Thomas Penketh,  a local Warringtonian, who became an Augustinian Friar and  who had an eventful life as an international renowned scholar  and head of his order in England, before suffering many years after his death a reputational 're-write' to suit the incoming propaganda of the Tudors  by Thomas Moore. He is even mentioned as a 'bad guy' in Shakespeare. 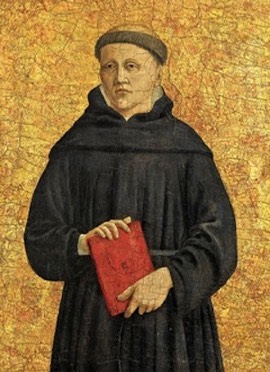 Synopsis of his talk by Bill Cooke.

Words below by Bill Cooke

William Beamont, the great nineteenth century historian of Warrington was worried by Thomas Penketh (1437-87). So much so he felt the need to apologise for his actions.
What had Penketh done to deserve a posthumous apology?

This is what Warrington Museum has to say about Penketh:
‘A local scholar, Thomas Penketh became head of all the Austin friars in England by 1480. Mentioned in Shakespeare’s play Richard III,
Friar Penketh’s ill-advised support for the king led to his disgrace and downfall.’

Unfortunately, most of this is incorrect.

Firstly, Penketh was not merely a ‘local scholar’. He was a scholar of international repute.

The Wikisource quotes Dictionary of National Biography, 1885-1900, Volume 44 Penketh, Thomas by Alice Margaret Cooke, which makes the same error of assuming the Friar  was 'degraded' during his lifetime! This may be source of the Warrington Museum entry error.

He became a worldwide authority on the philosophy of John Duns Scotus. After studying at the university at Padua, Penketh was asked to stay on as professor of metaphysics until 1475, before being offered an even more prestigious position at the university at Pavia.
Unfortunately, he could not take up this position as he returned to England, where he became the Provincial of the Austin order in England for the second time.
He served first from 1469, taking office shortly after graduating with a doctorate in theology from Cambridge university in 1468.

Penketh supported Richard III in a sermon at Easter 1484, validating Richard’s rule in terms of canon law and citing the alleged bastardy of the princes in the tower as reasons for their ineligibility to rule.
This was why William Beamont felt the need to apologise for Penketh.
It is not correct, though, to say that Penketh suffered ‘disgrace and downfall’ as a result of his support for Richard III. His actions were entirely consistent with his beliefs and shortly after giving his Easter sermon, Penketh was re-elected to his third term as Provincial of the Austin order in England.
Penketh died peacefully while holding this office in 1487.

We don’t have to agree with Friar Penketh to recognise him as an outstanding Warringtonian.

Dr Bill Cooke teaches philosophy and religious studies at Priestley College in Warrington.
He is writing a book on the intellectual history of Warrington.

Synopsis of talk given to the Culcheth Local History Society, 9 May 2109; by Bill Cooke.

What Bill Cooke brought out and vividly illustrated, was that the 'blackening' of the real history and work of Frier Penketh  was in fact  'propoganda' many years after the Friar death against Frier Penketh to suit the change in Monarchy and was carried out by the master of propaganda Thomas Moore to suit the politics of his age and his master Henry VIII.

Thomas More – a public servant who from 1518 served on Henry VIII’s Privy Council and later became Lord Chancellor – wrote his History of King Richard III between around 1513 and 1518.

More’s account – which dramatised conflicts, provided descriptions of both body and mind, and looked for causes as well as recording facts – was popular and was incorporated into the work of other chroniclers, including Holinshed and Stow, as well as influencing dramatists such as Shakespeare.

The work survives in English and Latin versions, both unfinished, with some variation in detail between the two. More borrows freely from other Tudor accounts of Richard’s reign, such as those by John Rous and Polydore Vergil, and adds original detail from direct testimony.
The portrayal of Richard III

Richard III’s Tudor successors from Henry VII onwards had a vested interest in portraying him as a bad, and indeed unlawful, king to increase their own legitimacy as the line who deposed him. More’s account, written under Henry VIII, follows the Tudor propagandist line and paints Richard as a usurper, accusing him of killing the princes in the tower (it is likely but not proven that Richard arranged their deaths).

Half way down the first column on page 37 is More’s now famous description of Richard:
‘little of stature, ill featured of limes, croke backed, his left shoulder much higher than his right, hard favoured of visage … he was malicious, wrathfull, envious, and from afore his birth, ever frowarde.’
He also describes Richard’s difficult birth, used to portray him as monstrous and unnatural, reporting that it was said he was born feet first and ‘not untothed’ (i.e. born with teeth). More considers the possibility that these reports go beyond truth out of hatred for Richard, but also ‘that nature chaunged her course in hys beginning, whiche in the course of his lyfe many thinges unnaturallye committed.’ In the second column, More also describes Richard as ‘close and secrete, a deepe dissimuler’ and ‘not letting to kisse whome hee thought to kyll’, a line that seems to anticipate Shakespeare in Richard’s line ‘why, I can smile, and murther whiles I smile’ (3 Henry VI, 3.2.182).
Shakespeare’s Richard III and More’s History

More’s History is the main source for Shakespeare’s play Richard III, although there is no evidence that Shakespeare knew the 1557 version in addition to the 1548, which he had definitely read. More’s witty and ironic presentation of Richard and his villainy seem to have been particularly influential, as were the parallels he drew between theatre and politics: ‘And so they said that these matters bee kynges games, as it were stage playes, and for the more part plaied upon scaffolds’ (p. 66). 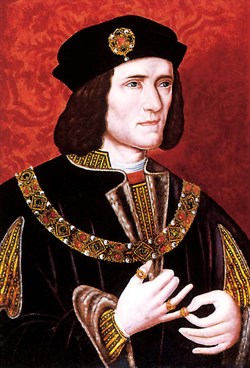 Foreign Painting of Penketh as a worthy person.

International reputation during Friar Penketh's lifetime is shown by the painting in Italy. 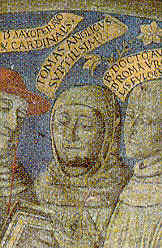 Refer: Italian fresco of Friar Penketh ,   Descriptionis in Italian in this reference.

The Friar's main studies were on the writings of 'Jihn Duns Scotus' a major study for senior churchment of his day. 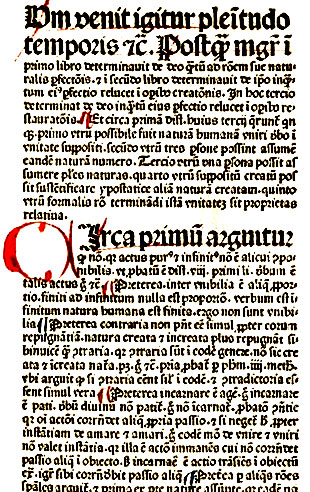 The printed works of Friar Penketh are illustrated above.
From ex-augnet_Penketh-writing-in-Latin_printed -1481_AN4360_AC985_310u 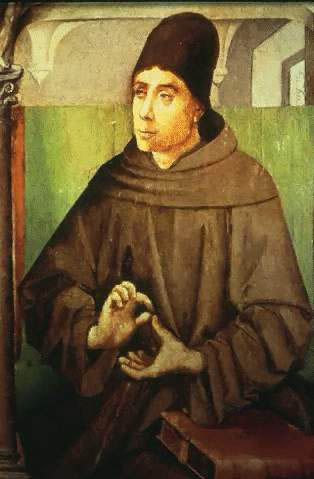 Refer for works of Duns Scotus:

The memories of Friar Penketh about us, are in his name in use in London places and the pub in Warrington

The church where Friar Penketh was located in London may be as this illustration: 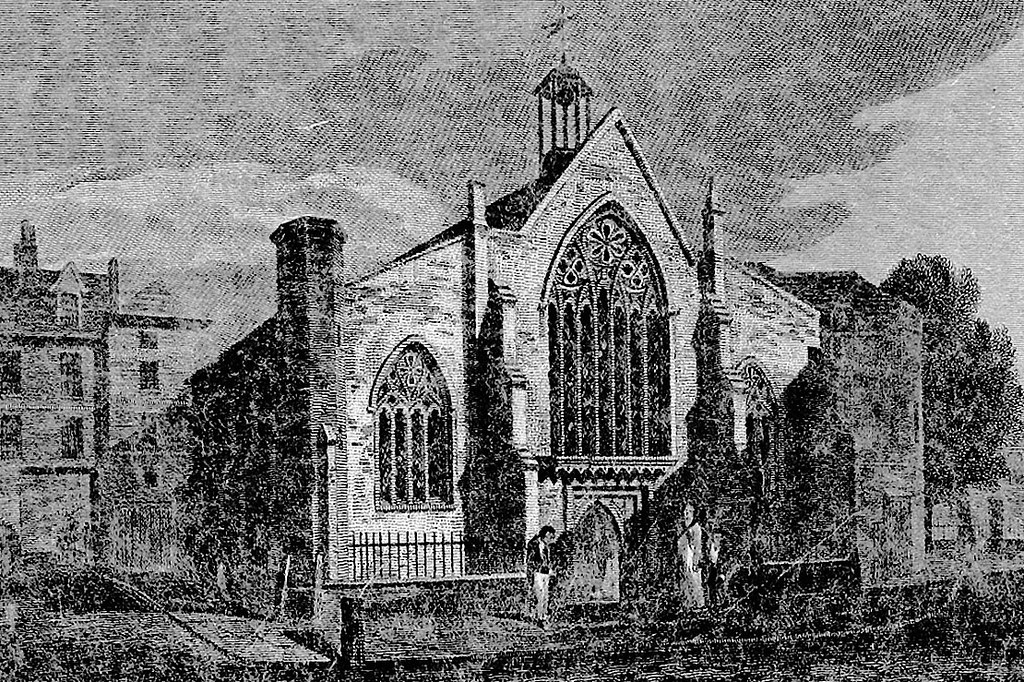 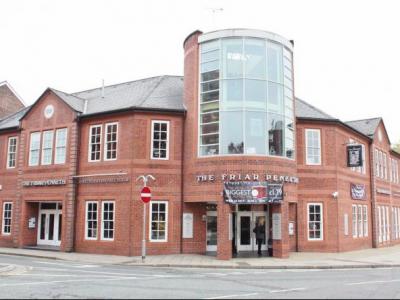 Articles on the Augustinian Order.

Copies of the books are held by libraries listed in

list of books whose authors include Thomas Penketh available from libraries:

Statue of a Friar in London.  "Austin Friars" 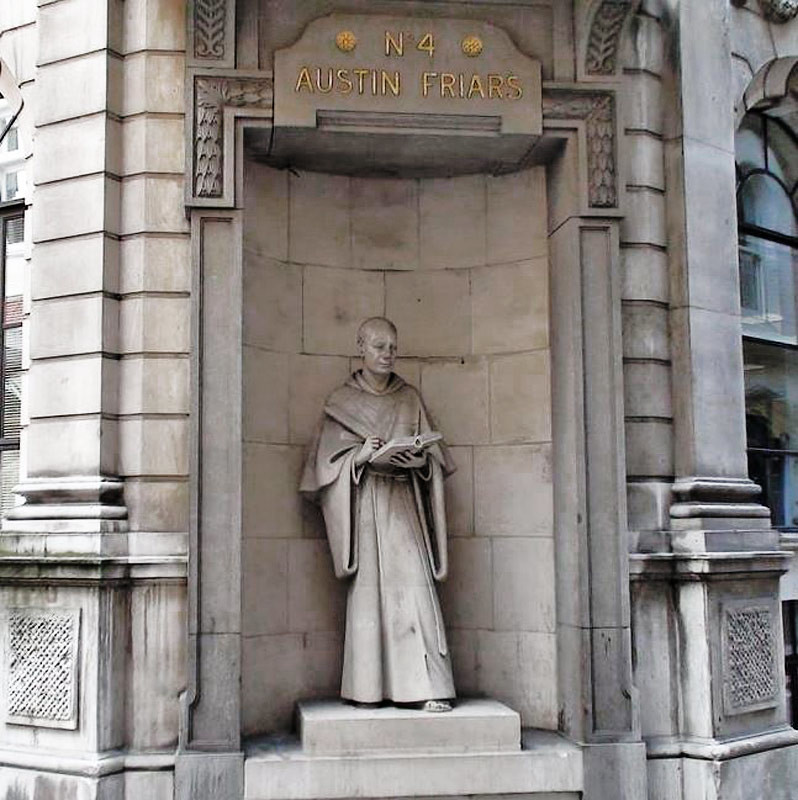 The talk was a magnificent visitation into how propaganda after a person's death can truely destroy a reputation gained during life.

The members and visitors give theri heartfelt thanks to Bill Cooke for his talk and presentation.