A Basic History of Warrington through Maps.

On Thursday evening the 12th of March 2020, a group of members and visitors braved the weather and thoroughly enjoyed and responded to a most entertaining and informative history of our local town. Its development from pre-medieval and medieval township to industrial revolution was told though our speaker Mr Philip Jeffs’ commentary on the maps and places on the maps he displayed from the Warrington Archives and other sources.

We heard stories behind the places and the local power seekers and family rivalries for power, control of tolls and thus wealth and status. Philip Jeffs reminded us that maps exist to record facts and the changes to existing facts at specific times.

In the local area much was done to obtain old knowledge by an antiquarian obtaining details from old deeds and records of land transfers and marking this on a reconstructed map.

The reason for Warrington’s existence lies in it being the lowest fording point (since Roman times) and later the lowest bridging point on the River Mersey.
This was very important to those who would invade from North to South or defend the North by bringing an army from the South or invade the Northern parts (Scotland) from the South.

If you did not cross the Mersey at Warrington you had to divert your forces to Manchester to the next bridging point. (About a four to five day detour with an army; or yourself walking.)

The Warrington bridge seems to have been a variable structure, sometimes there on the maps, sometimes not there. A wooden bridge was vulnerable to floods, storms, decay and lack of maintenance. So it was recorded on some maps or records and was absent at other times.

The maps and other information are viewable at the Archives in Warrington library by request.

As the maps illustrating the talk are not available on-line, we can only show some details here.

In the geological map below the “Yellow Band” is the flood plain and marsh alongside the Mersey. The Red mark is the Warrington Castle position. It was a wooden fort or castle of the motte-and-bailey type, which is a fortification with a wooden (or stone) keep situated on a raised area of ground called a motte, accompanied by an enclosed courtyard, or bailey, surrounded by a protective ditch and palisade.

The Warrington Castle was on the drier higher ground about 250 yards from the river with the nearby church of St Elphin’s. So the older power authorities of church and state were above and close to the ford position, with a ‘high street’ adjacent for the local wealthy houses with land behind for growing food.

Geology of Warrington surface and Bedrock

Link to Geology of Britain viewer by The British Geological Survey.
https://www.bgs.ac.uk/discoveringGeology/geologyOfBritain/viewer.html

Old maps detailing the area are very few but show the development of the town with the big change when a bridge was built. However the original wooden bridge is ‘sometimes there on a map’ and ‘sometimes absent’. On one map the bridge has a central pier with a tower in which a canon was mounted to protect the town waterway and bridge way

The map from James Kendrick’s account of the siege of Warrington in 1643.
The bridge at Warrington was a major point for both Royalist and Parliamentarian forces.
The map shows the “old town” based on the castle, St Elphin’s and the ford; and the “new town” of the merchants and crafts based on trade over the bridge. A clear distinction of how one part was abandoned for another part. 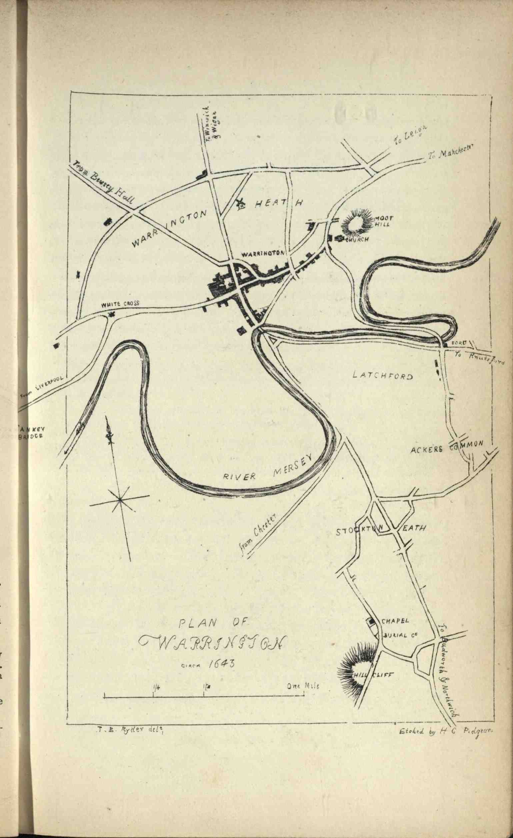 The ford or ferry was controlled by one family with a toll payment being made, while another rival family obtained a license to build a bridge and gather tolls; after they had purchased land on the both sides of the river, so they could bridge with bridge ends and supports on their own land on the south side and the north side. As the tolls were the same at "One Penny" most folk, armies, and merchants preferred the bridge to the ford or ferry, a quicker and drier passage.

The older ford was guarded by a castle “Warrington Castle”, and had the nearby church of St. Elphin and a high street and a route to the ford. Later as persons preferred to cross in the dry rather than the ford, a new centre for the town arose close the bridging point. The old town preserved the medieval strip farming lay outs and houses long past the time when they would have been changed so later maps reflected this old style many centuries later, as the wealthy and industrial folk had ‘moved’ to the new centre based on the bridge position. 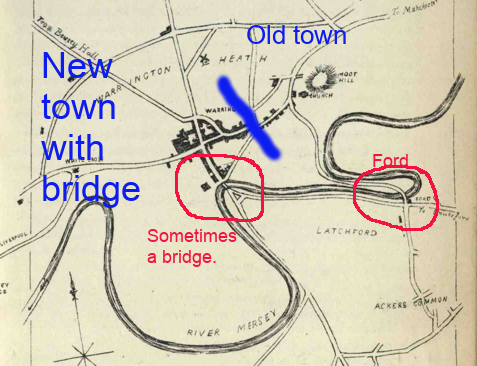 The wealthy folk and powerful families had moated houses. We learned that in these days you most feared your next of kin through the inter-family lust for power and control, and the moats were to keep you safe from your own deadly relatives rather than marauding armies that crossed the Mersey.
It appeared that killing one’s next of kin to get control was a normal thing, going unpunished if it suited the higher powers.
Women and Serfs were ‘disposable property’ something like the disposable items and packaging used today.

Ballads of a Killing.

Ballads of killing at Bewsey “Ballad of Bewsey”
Link: http://www.allthingswarrington.net/Poetry/Poetry/thebewseyballads.html

One map has the position of the ford marked as “the hell hole”.
The Hell Hole was at the bend where the ford was, here the river was deceptive and boats could ground if they strayed slightly from the ‘deeper channel’. 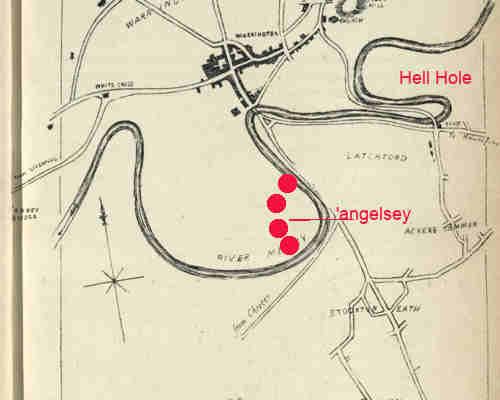 The ‘anglesey’ or ‘hook island’ lay below the lower bridging point.
Presumably an area that became an island when the river flooded.
"Anglesey" is derived from Old Norse, originally possibly Ǫngullsey "Hook Island" the place name was used by Viking raiders as early as the 10th century and was later adopted by the Normans during their invasions of Gwynedd and so passed into common use.

A detailed map of Warrington town. (Not Illustrated)

A map created later by William Beamont, Antiquarian and lawyer (and also ‘lord high everything’ in Warrington) from reading many old legal land transfers to get the data to represent the area at an earlier time. Beamont's map included details of land area holdings derived from land transfer deeds and early documents to give a good impression of houses, field boundaries and burgage details.
You can view the map at the Warrington Archives, which also contain Beamont’s diaries.

The Burgage Plot was part of the property owned by a burgess in a medieval town. As burgesses congregated around the market place and main streets, space at the front was at a premium. Burgage plots are therefore characteristically long and narrow, with a row of outbuildings stretching to the rear of the house and shop. The pattern of burgage plots is often evident from old maps and sometimes can still be discerned on the ground.

In Warrington originally burgage plots were used for keeping a pig and growing fruit. To have ample food was high status, while later these were used for leisure gardens without the food element as people became dependant on trades folk to supply food items. 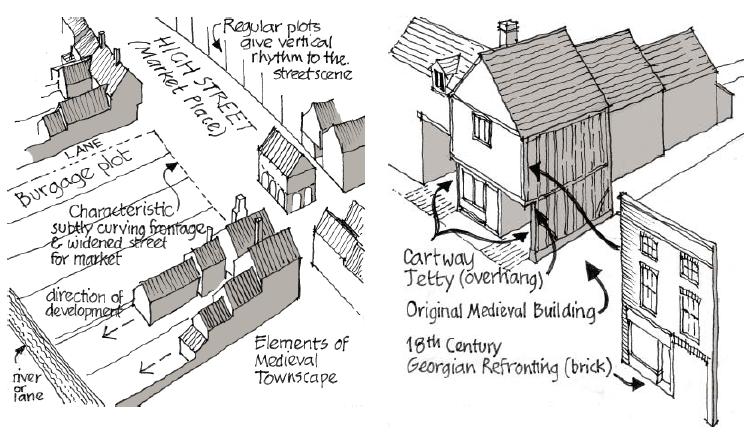 Page and map about Warrington siege 1643 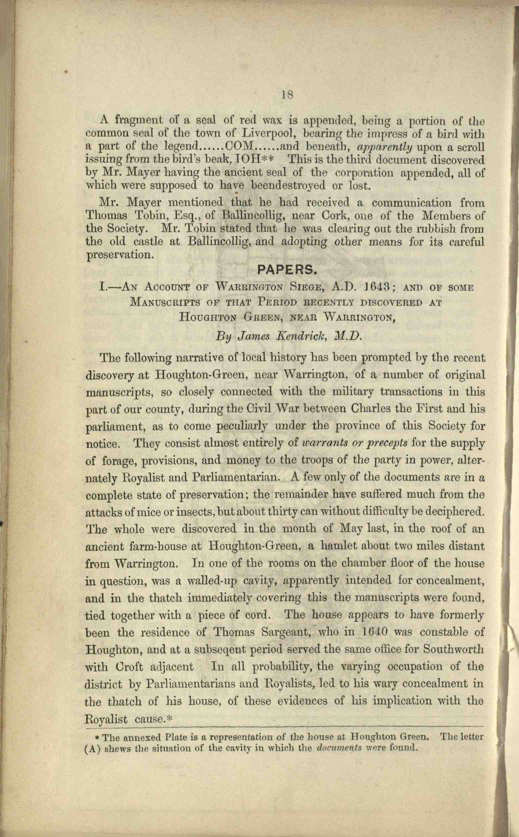 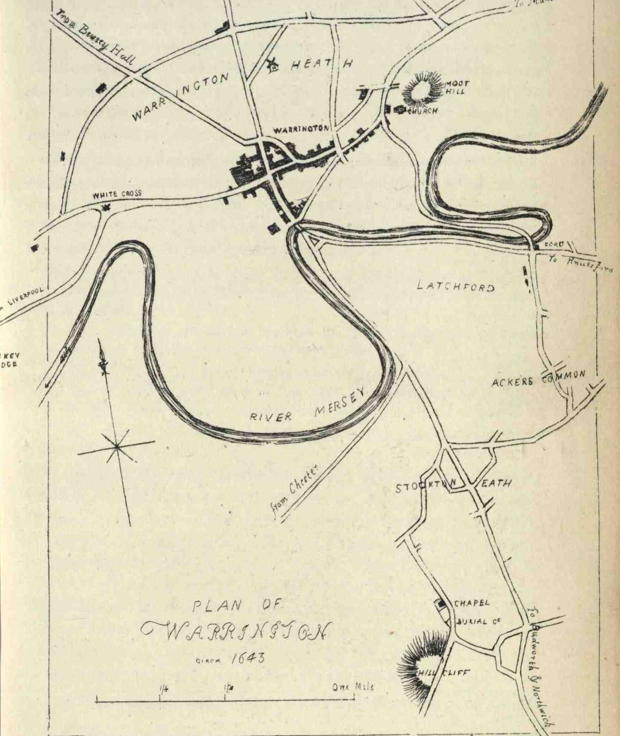 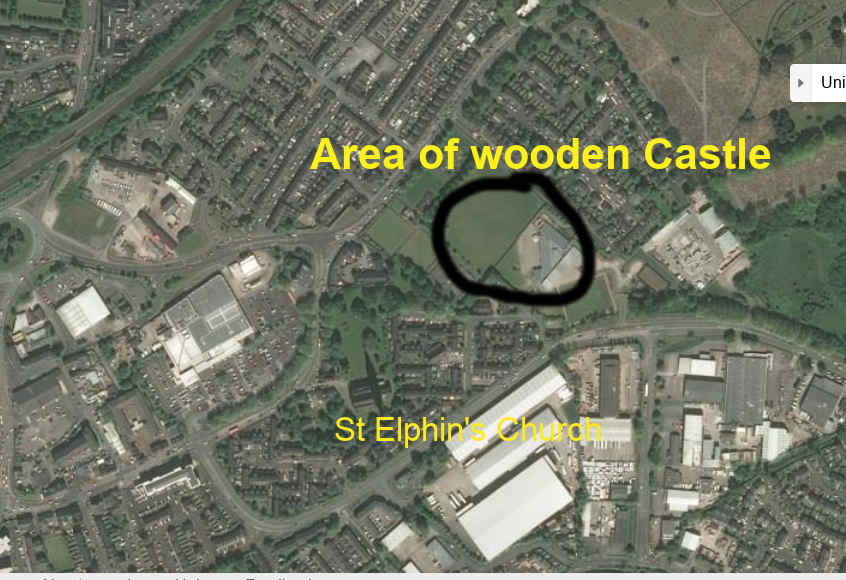 These were made after the upper part of the raised mound had been 'levelled' to avoid the lady pupils of a school situated there from hard exertion in climbing up the mound.

These online versions of Old Maps of Lancashire were produced by The Environment Directorate's Archaeology Service.

The so-called "Gough Map" is the earliest surviving map of Britain dating from c.1360. It’s origins are unknown and owes it name to, Richard Gough (1735-1809), in whose collection it was found. This extract is from the OS 1935 facsimile which is reasonably legible. The original is coloured and is in the Bodleian Library, Oxford but is much less legible. An online version of the original has now been made available by Queens University, Belfast:
http://www.goughmap.org/about/
https://upload.wikimedia.org/wikipedia/commons/0/00/Gough_Kaart_%28hoge_resolutie%29.jpg

A speculation by your writer is that the second upstream building from Liverpool (line crossing trail) would be the lowest crossing point on the Mersey at Warrington, and this is reasonable from a search of the Gough map at RED Point on the coloured map. The journey line crosses the Mersey at presumably the lowest fording or bridging point.

John Speed's map of Lancashire is one of the earliest and shows towns and villages but no highways. Extract of Black and White Map below.

Wenceslas_Hollar_(1607–1677)-Cheshire_(State_6)-County-Palatine-Cheshire-JPG
This shows Warrington as the only town on Lancashire side of Mersey below Manchester. 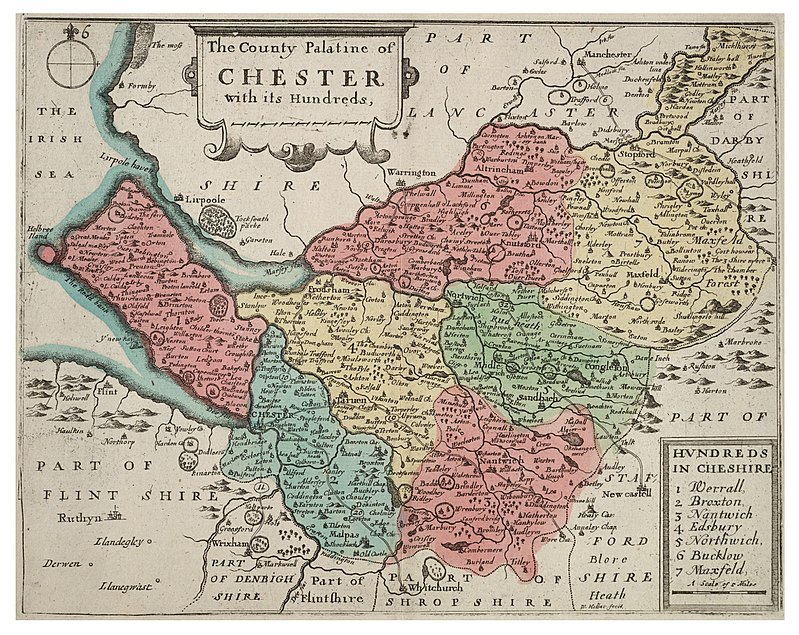 Some linear maps of the time “A ribbon of the journey between places” showing towns, inns etc, but without any geographical layout. Some what similar to a modern list of places in a car journey routing from map sites. 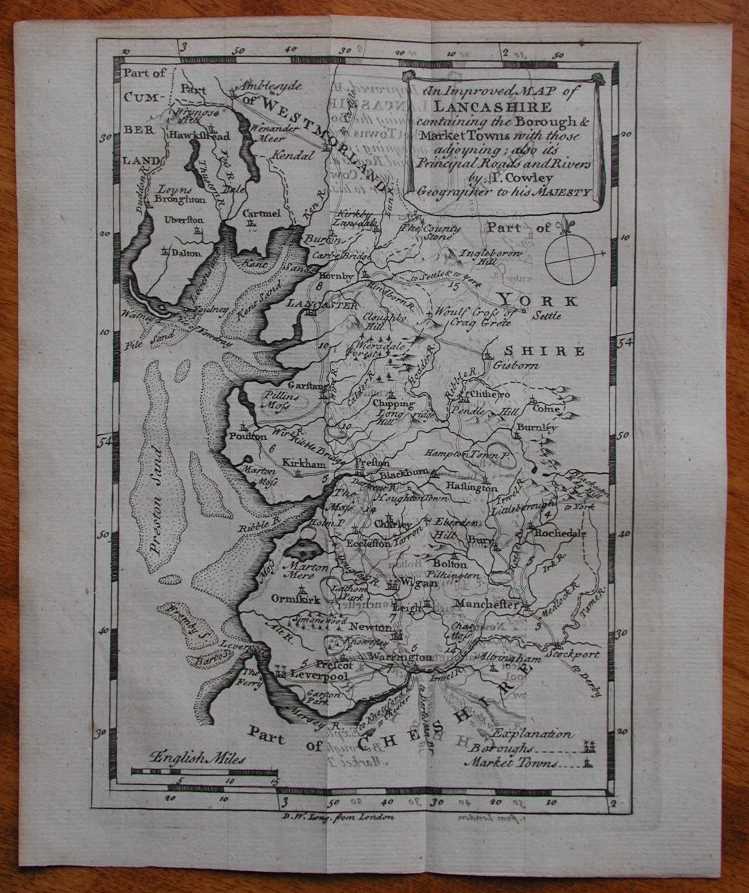 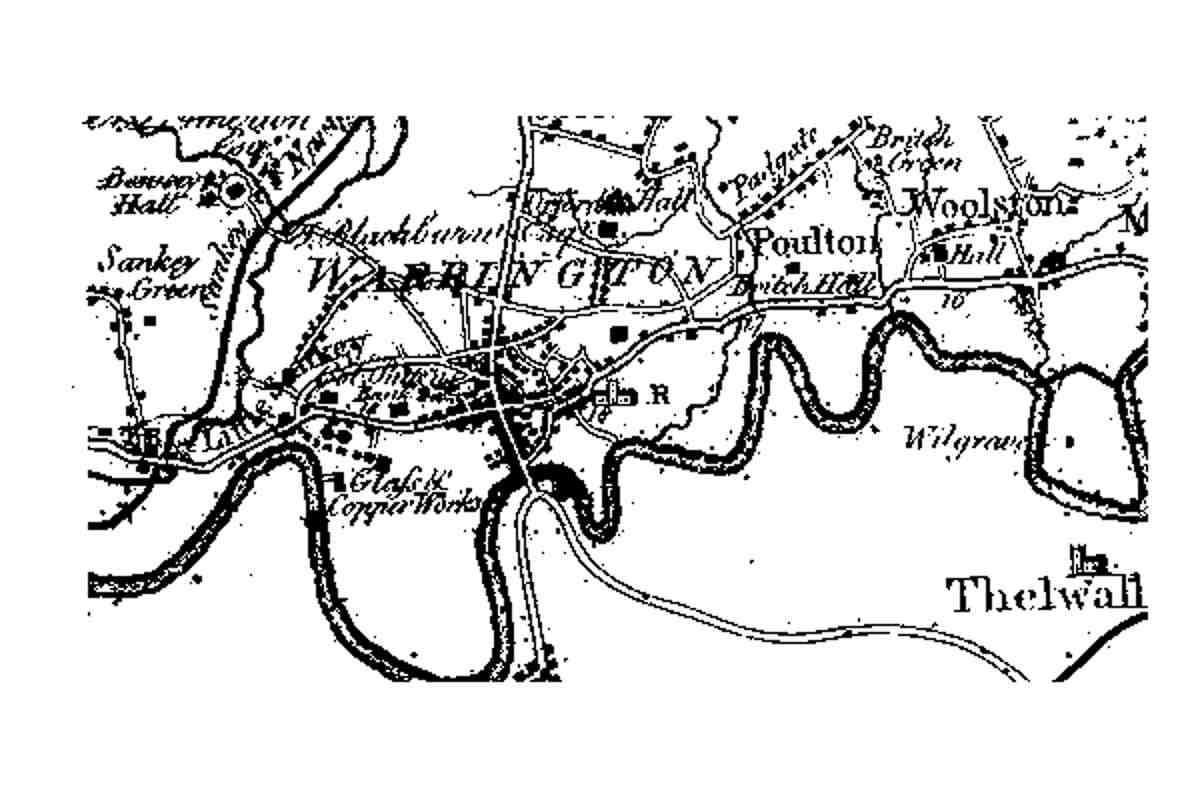 Extract of river Warrington to Rixton.

Search for Warrington and then select your scale.
Link
https://www.streetmap.co.uk/map.srf?x=360500&y=388500&z=120&sv=Warrington&st=3&tl=Map+of+Warrington,+Warrington+[City/Town/Village]&searchp=ids.srf&mapp=map.srf 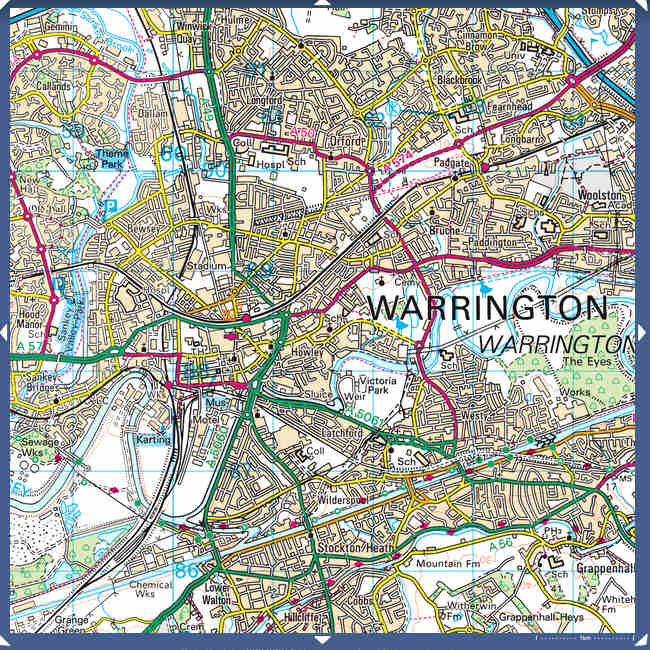 The members and guests give  thanks to  archivist   Philip Jeffs for his study and enthusiastically giving us knowledge with illustrations and answering many questions from the audience in this much delayed talk due to external circumstances.

A history of Warrington without maps is on Warrington Borough Council website.

The Ballad of Bewsey and Annals of Warrington. (Digitised copy by Google)

Full text of "Annals of the lords of Warrington for the first five centuries after conquest" .
A long read of the murders, incidents, and grappling for power in early Warrington.