On the 14th September Members were delighted with the enthusiastic and informative talk given by Margaret Ingham. The chair of a local group called 'Friends of Warrington Transporter Bridge' (FoWTB) which was formed in April 2015 to act as the independent voice of the bridge and act for its preservation.

It is the only rail transporter bridge built, and is one of 12 remaining bridges in the world, of which there three are in the UK.
Only 22 bridges were built with the Warrington one being the last one.
Reference List at: 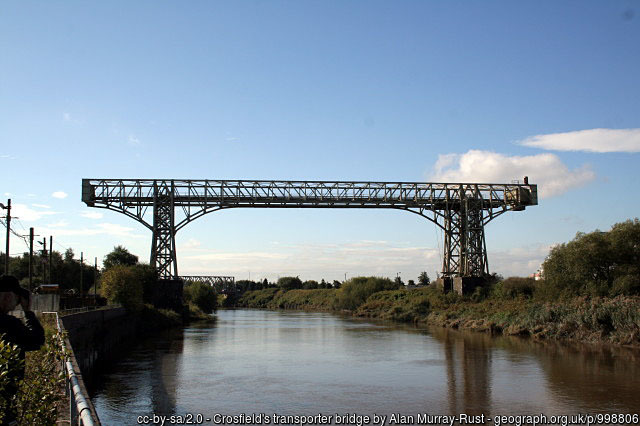 email: This email address is being protected from spambots. You need JavaScript enabled to view it.

The talk inspired a few members to consider a walk to the bridge, (good footwear advsable; avoid vegitation on side of paths) while some recalled playing and walking their dogs near it. 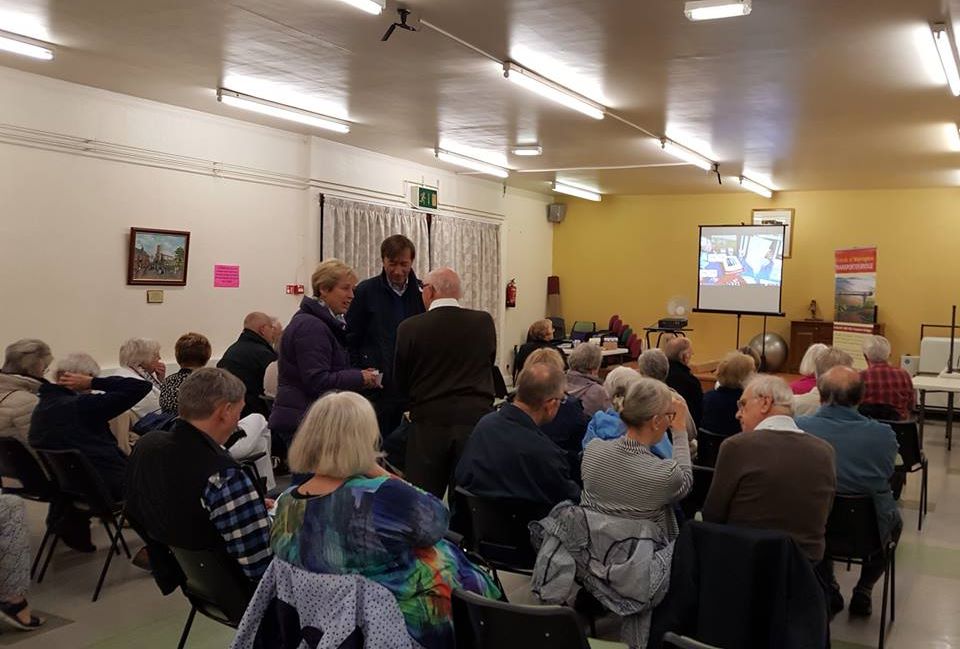 For details of how to walk to the bridge and visiting it, please refer to FOWTB website. 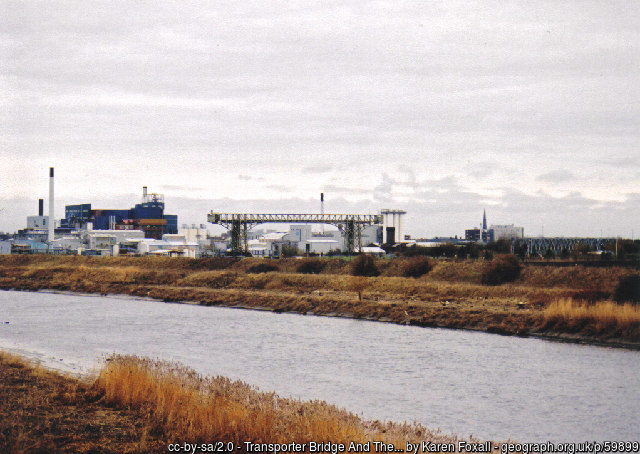 The bridge goes under a number of different names occasioned by its history.

This was the only transporter bridge built by a private company.
The others were for public use and publicly financed.
Crosfield's soap works started in 1814 as a chemical works for the production of soap and were the owners as the bridge was for their private use within their chemical site and with a side line in cement to use up a hazardous material they were asked to stop 'dumping' in the River Mersey. The bridge transported on rail wagons the raw hazardous stuff to the cement works on the other site where it was used in cement manufacture.

Joseph Crosfield was a Quaker businessman who established the soap works on the banks of the Mersey in 1814.
Soap consumption doubled per head of population in the first half of the 19th century.
Add to this the increase in population who came to use easily available soap from Crosfields and other manufacturers with a consequent increase in popular health, and the population itself also grew fast.
Crosfield, and his offspring as owners/operators of the plant learn from German advances in chemistry.
This altered the 'chemical works' and the Warrington landscape.

The site still operates after many changes in ownership, but no longer makes "soap".

The Joseph Crosfield & Sons chemical works at Bank Quay was sold to Runner Mond in 1911 (family quarrels involved in this as one side favoured Unilever) and then passed to Unilever, then to ICI, then Ineos Capital in 2001, where after the 'Crosfield' brand was dropped for 'Ineos Silicas' and since the merging of Ineos Silicas and PQ Corporation in 2008 it became PQ Silicas UK Ltd. part of PQ Corporation.
Link to current ownership:
http://businessperson/news/home/20080702005824/en/PQ-Corporation-INEOS-Silicas-Merger-Complete 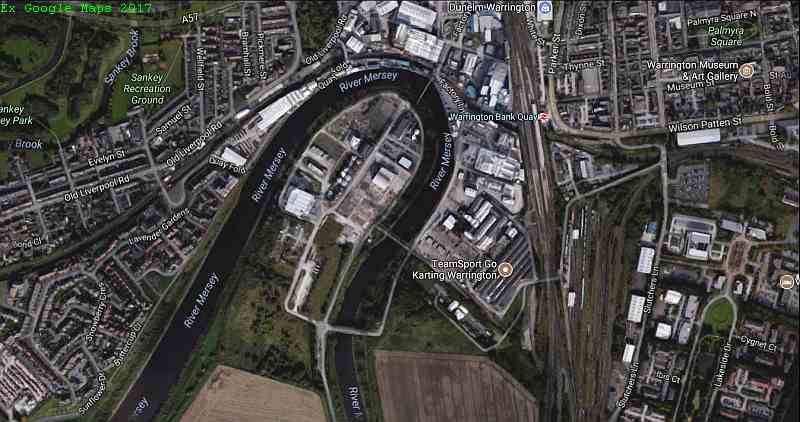 Why the transporter bridge?

To keep an open passage for ships on the Mersey when the bridge was not in use. The height of side supports cleared the masts of the ships. 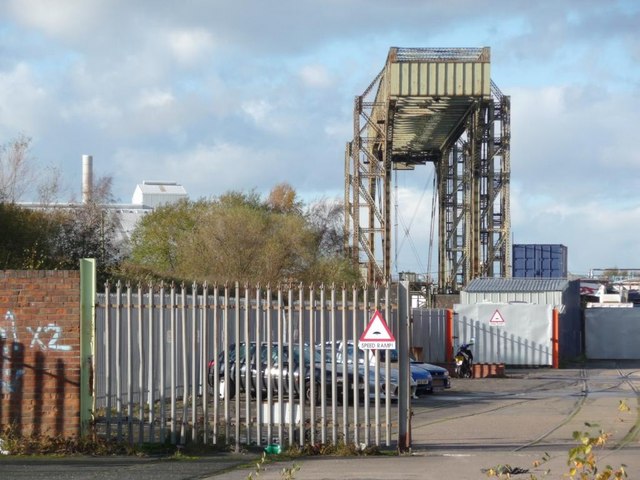 We quote from a website devoted to cement kilns, which gives details of the 'use' of the bridge.
link
http://www.cementkilns.co.uk/cement_kiln_crosfield.html

1907-1911 J. Crosfield and Son Ltd
1911-1919 Brunner, Mond and Co. Ltd
1919-1929 Lever Brothers Ltd.
Crosfield’s main business was soap, but they were also a significant producer of sodium silicate. The main plant was the Bank Quay works on the Lancashire side of the Mersey in Warrington. The plant produced waste calcium carbonate from conversion of sodium carbonate to sodium hydroxide. Until 1899, the carbonate sludge was dumped in the Mersey at a rate of about 150 tonnes per week. Crosfield’s were finally prosecuted following pressure from the Ship Canal company, the Mersey Conservancy Board and the Borough of Warrington. In 1899, filter presses were installed and the resulting concentrate was re-used, some in whiting and some in bleaching powder, but mostly as agricultural lime. Sales were around 20,000 tons at £0.15 per ton in 1904-6.

Optimism about the future progressive increase in tonnage led them to embark on the cement plant project in 1905. The plant was built on the opposite (south) bank of the river, and included in the project was the construction of a transporter bridge (the first of two). The carbonate (now once again handled as sludge) was pumped to the plant over the bridge, and was washed with local clay. The plant was not up and running until the end of 1907, and Davis’ 1907 capacity of 300 t/week must have been a projection. The plant was operated, irrespective of cement trade conditions, to absorb the available carbonate waste, and only made a profit in one or two years of its life.

In John Hudson Earley's diary (R 27/3/1908), he was told by the Polysius rep that Crosfield’s “have not enough waste products to keep one kiln going, but they have told (him) that they are trying to buy other waste products from Lever Bros. & other soap people & if they succeed they will put a second kiln down”.
Its turnover was never more than 2% of the overall plant’s turnover. It is, however, noteworthy that the amount of cement produced was always less than half the stoichiometric amount expected from the plant’s sodium hydroxide production (2.2 tonnes cement per tonne of NaOH), and it is likely that persistent operational and product quality problems were the main factors in its failure.

In 1929, the sodium hydroxide plant was changed to the Mount process, in which calcium carbonate precipitate is converted back to lime in a rotary kiln (not the same one) and recycled. The cement plant closed when this became operational.

The plant despatched product by rail: trucks loaded on the peninsula were carried by the second transporter bridge across the Mersey to the company’s railway sidings. The site of the cement plant was subsequently redeveloped with other plant. Attempts are being made to preserve the second bridge, which is a scheduled monument, see website.

The rawmill arrangement is unknown, but evidently there were initially washmills in which the clay was combined with carbonate slurry. 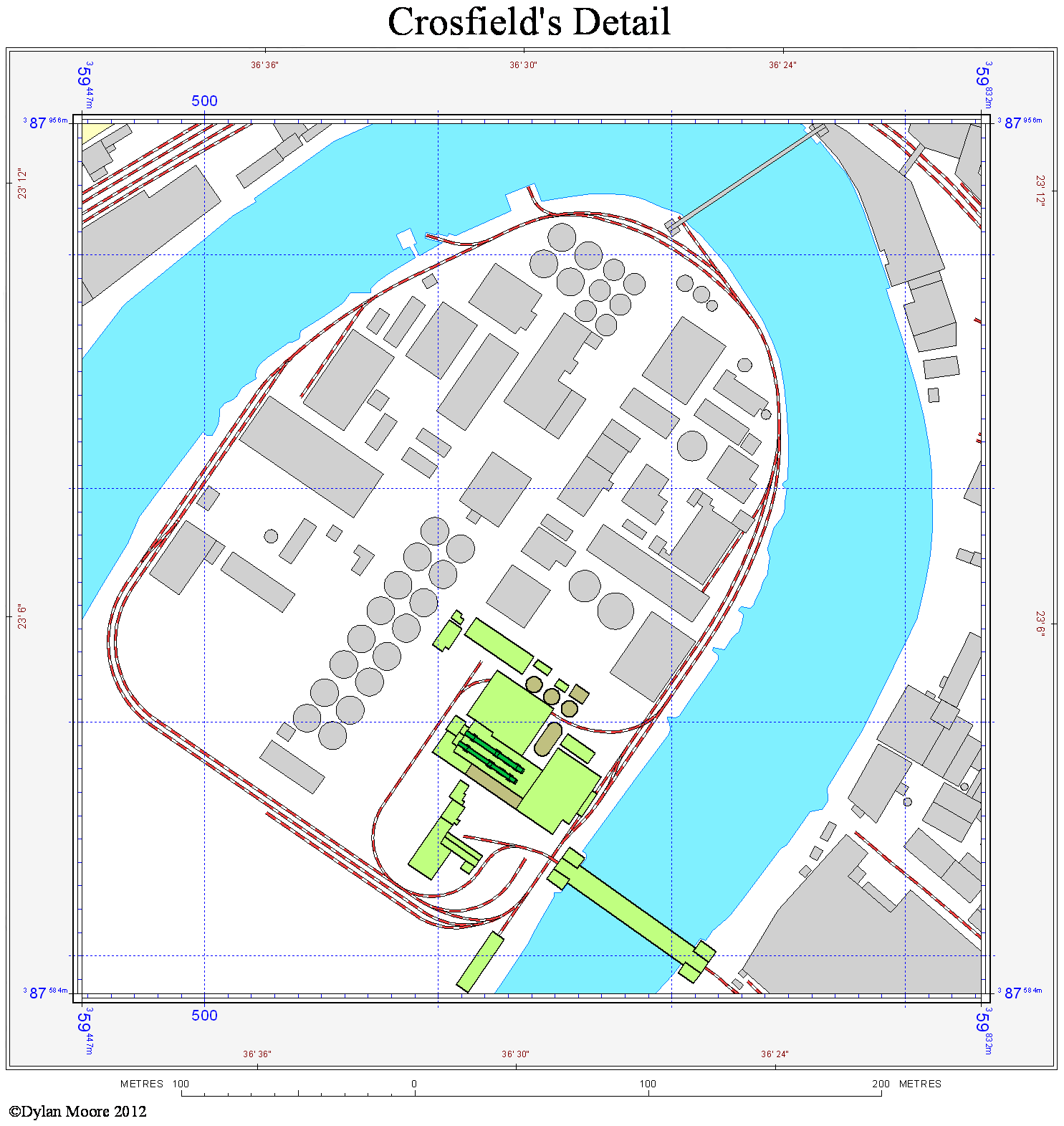 Notes to Cement Kiln map. (Map Copyright Dylan Moore 2012)The first transporter bridge, at the north of the peninsula, was erected for light goods and passenger transport to the cement plant, which was the first development south of the river. It also carried the pipeline for delivering calcium carbonate sludge from the alkali plant at the northern edge.

The second transporter bridge (the subject or the talk) was erected to despatch finished product from the cement plant and the subsequent developments. Clay for mixing with the alkali sludge was landed at wharfs on either side of the second bridge. The rest of the south bank development consisted mainly of oil extraction plant on the west side, and the oil hydrogenation plant on the east side (the "VB plant" = Vegetable Butter). This was the UK's first plant making margarine from vegetable oils by Sabatier-Senderens hydrogenation.

The good work of 'Friends of Warrington Transporter Bridge' (FoWTB) aims to keep the bridge in its present state and which will take a great deal of cash, so they welcome all donations to enable then to bring about public knowledge of the bridge and act for its preservation.

Signs to the bridge have been erected in the last few years due to their actions and there is some interest in Warrington of its position in the town as a world status tourist attraction (certainly to engineers!).

Listed on Buildings at Risk Register by English Heritage as Grade II* ('Grade Two Star')
It is also a scheduled monument.

The bridge is preserved under a 50 year lease in possession of Warrington Borough Council.
The lease expires in 2027.
Currently the gondola remains intact.

UK Bridges.
http://simplonpc.co.uk/UKTranspoters.html
Here there are a lot of good photographs.