On August 10th 2017 some members and guests visited the old but still working police station in Warrington to see the "Museum of Policing in Cheshire", the museum is an independent charity run by volunteers in co-operation with the Cheshire Constabulary.
The visit was enjoyable and members saw the old cells and a small 'spy hole' in a door through which one person escaped.
The Museum has the formal name of "Museum of Policing in Cheshire" and is located within the working police station at:

Members and others are encouraged to visit the museum to learn of the past and see the problems of policing.
Visits are by appointment only.
The museum is located in the County Police Office, Arpley Street, Warrington, Cheshire, WA1 1LQ, near Warrington Bank Quay railway station. 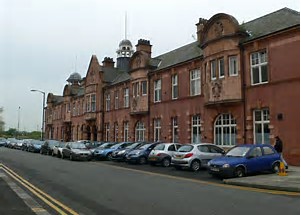 This is a working Police Station and the Headquarters of the Warrington Division of the Cheshire Constabulary. For security reasons, visits are by appointment only. Visits can be arranged for groups such as schools and others; and (are as we were) are given a tour by the museum volunteer staff. Visits should be arranged by reading the instruction on the museum website and by filling in their contact form on website link

(The writer is pleased to note that the museum contact form includes the option to send a copy of your request email to them to your own email address. This courtesy is often omitted from many website contact forms. EM.) 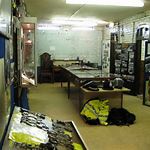 A brief note about the museum from their published data.

Police forces, by their very nature, have always been averse to throwing things away. Oddments have collected over the years into small displays, the forgotten corners of storerooms and the private collections of officers. During the 1960s and 70s, when the Cheshire Constabulary became the main overall force, many of these items were collected into a display at the Force Training Centre at Crewe. This display however was not open to the public. Documents were deposited at the Cheshire County Archives at Chester.

On retirement PC Peter Wroe began to organise items at Warrington into a museum. He greatly added to the exhibits by persuading former officers and their relatives to donate their private collections. Together with former PC Jim Talbot a large amount of documentary information was also collected and organised. In 2004 the Crewe Centre closed and the exhibits came to Warrington. The size of the collection was then such that a more formal structure had to be established to manage it.

In 2006 The Museum of Policing in Cheshire was formed as a private trust with a board of management under the trustees. Peter Wroe was appointed as Curator. The museum's objective is to advance public knowledge of the evolution, development and role of policing in the County of Cheshire from its inception to the present day. It does this by collecting, preserving and researching anything connected with policing in the County and making the results available to the public as displays in the museum, by publishing and on this web site. In 2007 the museum was opened to educational groups.

The naming of the museum indicates that its remit is all of the forces which were, at any time, part of the County of Cheshire. Many of the smaller forces have disappeared on amalgamation or with changes to the County boundaries. The museum is independent of the Cheshire Constabulary although the force does supply generous logistical support.

The museum is not just for the police. Policing is an integral part of our society and of the history of the County of Cheshire. To emphasise this connection the museum seeks links with many County institutions. The Grosvenor family is one of England's oldest noble houses, their main seat being at Eaton near Chester. They have always had friendly links with the Constabulary and the museum is delighted that the current head of the family, The Duke of Westminster, has agreed to become its patron.

The museum is a registered charity run on a voluntary basis with expenses being met by the donations of its supporters. From 2007 it has been open to groups by appointment. In 2010 the museum was refurbished with generous grants from Wren and Biffa and reopened in January 2011. It also became an accredited museum under the Museum, Libraries and Archives scheme by meeting national standards. 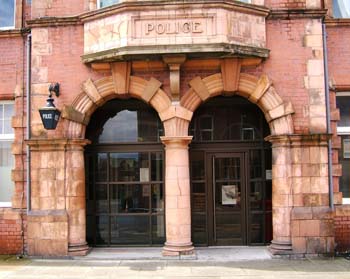 Our members than the volunteers who helped duringthe visit and we also than the museum's webmaster for a well constructed website.