Photographs are from Liverpool ECHO, The British Museum by permission (a typical pot), and the Liverpool Museums articles on the finds. All copyrights acknowledged.

On Thursday 11th October 2018, 26 members and 3 visitors were treated to a talk by Vanessa Oakden, the current Curator of Regional and Community Archaeology at Liverpool Museums about The Knutsford Hoard found by a metal detectorist who reported it to Vanessa Oakden in her former role for Liverpool Museums as Finds Liaison Officer. A ‘Finds liaison Officer’ is based at a museum and co-ordinates with and enters the reported finds into the Portable Antiquities Database after verifying that the find is suitable for entry to the database.

The Portable Antiquities Scheme is run by the British Museum and National Museum Wales to encourage the recording of archaeological objects found by members of the public in England and Wales.

The metal detectorist Mr Alan Bates found the items in 2012. First a couple of items. Then more then he rang Vanessa Oakden saying he had ‘found a hoard’, Vanessa disbelieved, as she had been given many false reports before, but excitement was generated as she asked questions and established that this Mr Bates knew his coins and could describe them accurately.

So out of the comfy office into the field and review the finds and establish what was there and if worth further investigation after of course getting the formal permission of the landowner to look at the area (a permission Alan Bates already had). 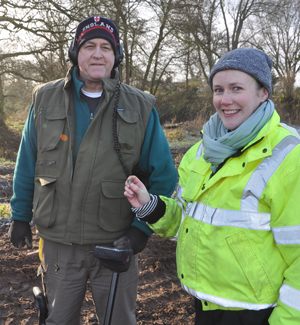 Alan Bates and Vanessa Oakden at site with a new find

Excavations then were organised using the metal detectorist’s skill to mark suitable areas as the items had been scatted from ploughing. As she was pregnant, excavating was not the easiest thing. She remembered the discomfort and the excitement. Our audience were in awe at her dedication to such uncomfortable field work. 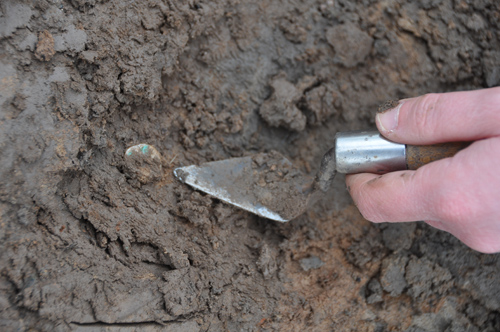 Coin being ecavated from ground showing muddy and wet conditions.

The result was “The Knutsford Hoard” found in 2012 by Alan Bates including three fine examples of gilt ‘trumpet’ brooches, two silver finger rings, and 103 coins which were issued between 32BC to the late 2nd century AD

The Liverpool Museum's page top photo of the hoard. Showing a ring, coins and broach

The preparation of the display.

Of course the biggest work is the cleaning, recording, and eventually getting the finds established as treasure under the Treasure Act. The metal detectorist and the archaeologists have to understand a great deal of complex law, (the “Gov.UK” website shows a 135 page PDF ‘summary’ as its code of practice) with regard to the finds, but a useful summary given below was abridged by Vanessa for our easy understanding “two or more coins or objects with more than 10% gold or silver over 300 years old”. The advice to metal detectorists on treasure is given below in the paragraph headed “Summary: Treasure Act."

Aquisirtion announcement in the museum's blog.

These 3 ‘trumpet’ style broaches are shown below, and also a modern cheap one (sold by internet) and one very expensive modern Danish version, so their use has lasted over many years with our population to hold cloaks or other garments 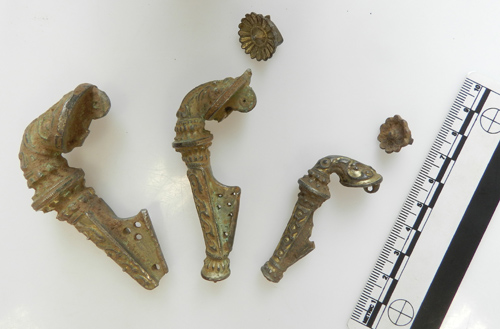 Photos of the old  hoard broaches.

and  photos of new modern equivalents still in use: 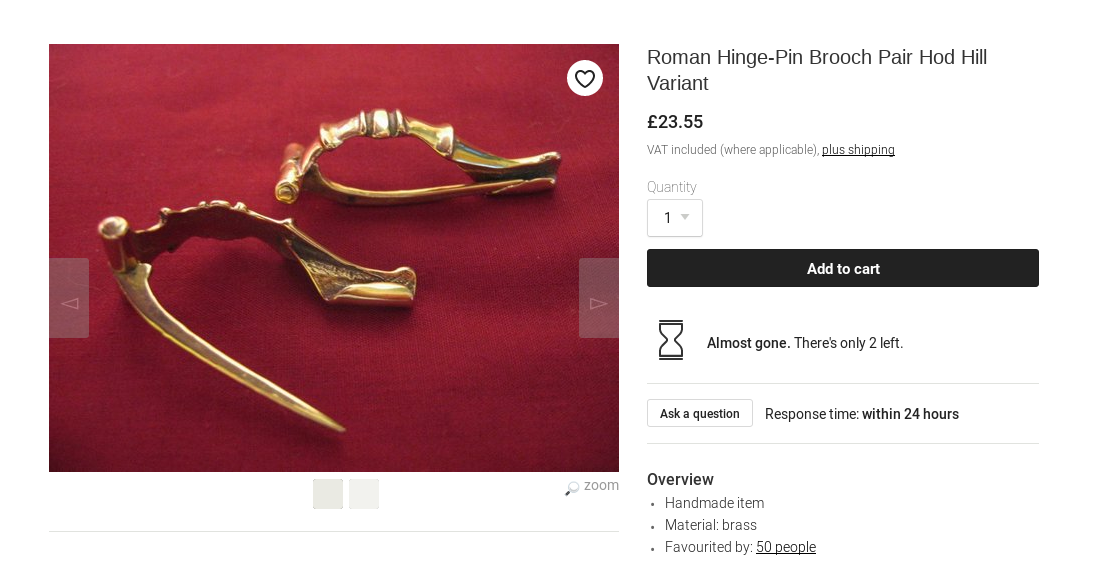 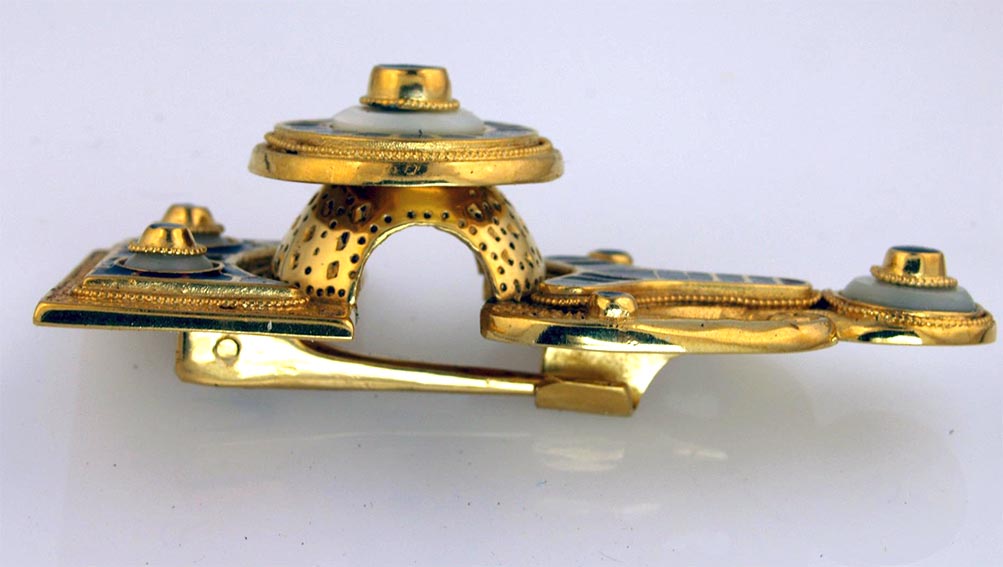 How two broach clasps and chain hold on a cloak, modern use in Denmark.

The two rings are shown, one with its decoration intact save for wear, and the other with the stone smoothed.
One has had the ring diameter adjusted (perhaps to re-use it for a second person).

There were silver ones and a small amount of copper ones. It is assumed the copper ones were placed at the top to form a top layer to protect or seal in the lower more valuable ones and the other objects in the pot, like a paper cover top in a jar of home made jam. 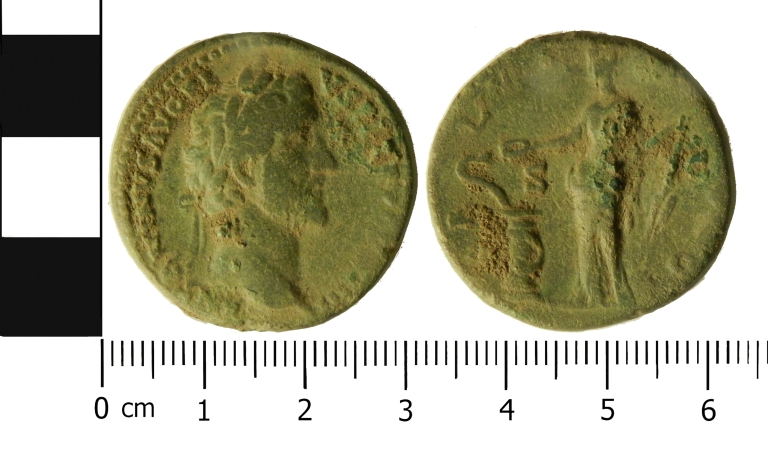 Photo of the probable seal or top layer copper coins. 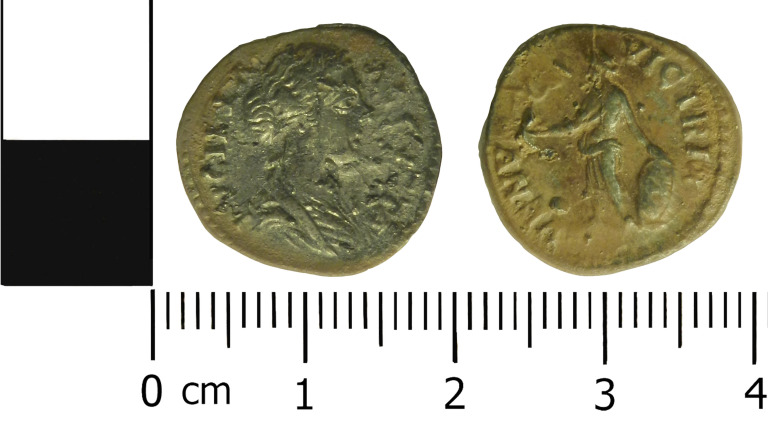 Not all the coins had 'macho emperors' on them. This shows Silver_denarius_of_Lucilla-and_Venus-standing-to-left_holding_victory_Liverpoolmuseums-photo 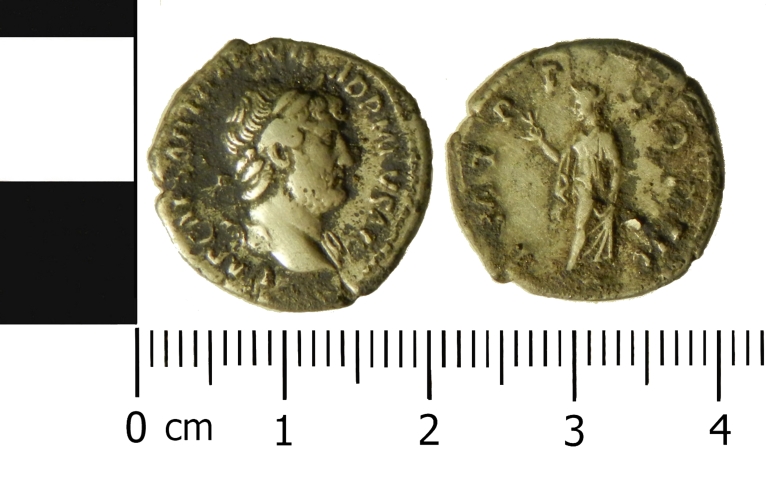 Uk's best known emperor, some Scots like his idea of a wall . A silver-denarius-Hadrian-liverpoolmuseums--photo. 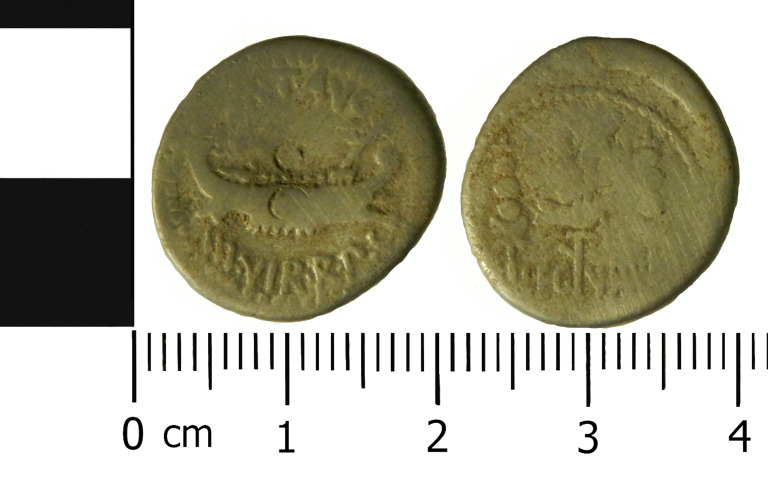 The playwright's and cinema's emperor. A silver-denarius-mark-antony-Liverpoolmuseums-photo 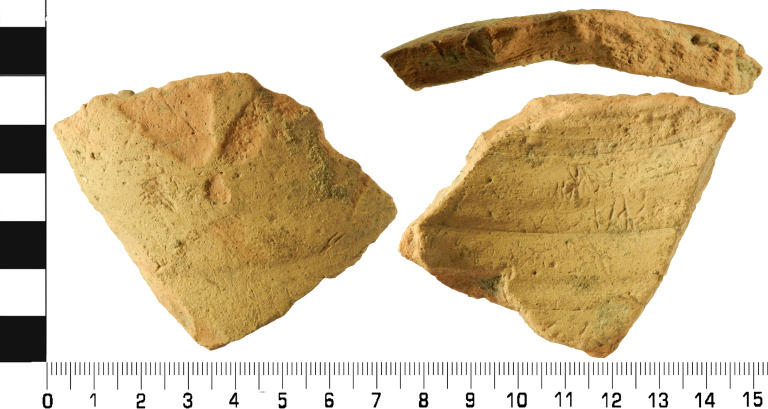 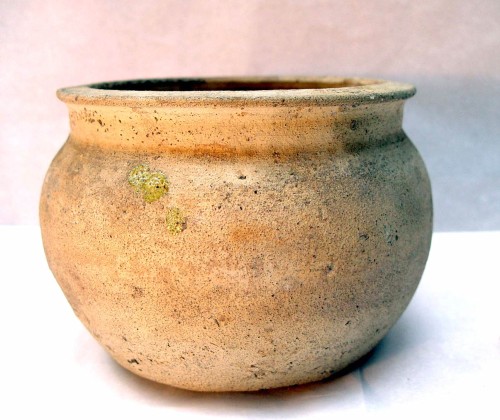 Typical pot from British Museum's collection. Was the Knutsford pot like this? BritishMuseum-typical-Roman-pot_360126001.jpg

The broken container with the ‘copper top’.

From the ceramic shards found at the site it is assumed that the hoard was in a ‘jar’ /‘cup’ / ‘vase’ with the top layer being the few copper coins which were used as a ‘lid’. The rim of the vessel was not found, and the shards were scatted across the area due to ploughing.
A very old ‘piggy bank’ with the silver and gold beneath the top copper coin layer.
If the container is of lead, the coins are in much better condition than if in a ceramic jar, due to chemical interactions of lead and the precious metals.

Typical container photo by permission of The British Museum (not the one of the Knutsford hoard as it is shattered.
The rim of the Knutsford Hoard pot has still not been found, only a few shards.)

Links:  for your better viewing and understanding of the finds.

The best photographs of all the items and a history of the finding and cataloguing is given on The Museum of Liverpool’s website and in the “finds” websites.
We do earnestly recommend a visit to these sites to understand all the items.

The Treasure Act, 1996 is a piece of legislation designed to deal with finds of treasure primarily those made by metal detectorists in England and Wales. It legally obliges finders of objects which constitute a legally defined term of treasure to report their find to their local coroner within fourteen days. An inquiry led by the coroner then determines whether the find constitutes treasure or not. If is declared to be treasure then the owner must offer the item for sale to a museum at a price set by an independent board of antiquities experts. Only if no museum expresses an interest in the item or is unable to purchase it can the owner retain it.

'Treasure' is defined as being:

All coins from the same hoard. A hoard is defined as two or more coins, as long as they are at least 300 years old when found. If they contain less than 10% gold or silver there must be at least 10 in the hoard for it to qualify.
Two or more prehistoric base metal objects in association with one another
Any individual (non-coin) find that is at least 300 years old and contains at least 10% gold or silver.
Associated finds: any object of any material found in the same place as (or which had previously been together with) another object which is deemed treasure.
Objects substantially made from gold or silver but are less than 300 years old, that have been deliberately hidden with the intention of recovery and whose owners or heirs are unknown.

Under English law a landowner has sole title to any archaeological artefacts found on his or her property. Legitimate metal detectorists come to an agreement the owners of the land they detect on to share any proceeds from treasure sales. Those who detect illegally, either on Scheduled sites or without the landowners' permission cannot benefit from the Treasure Act.
Illegal detectorists have had their loot confiscated and can face fines and prison.

Metal Detectorists and how their hobby enriches the U.K.

The value of metal detectorists to UK history.

In 2014 the BBC had an article and program on the finds from 2012, as it takes a long time to get all items organised, cleaned and recorded. They said:

Amateur archaeologists with metal detectors found 990 items classified as treasure during 2012, according to figures from the British Museum. All of the rare coins, rings and brooches contain gold or silver, and many date back more than 1,200 years.

The public reported more than 74,000 other historical items to the Portable Antiquities Scheme, which experts say has "revolutionised archaeology". More than 900,000 objects have been reported since it started in 1997.

Neil MacGregor, Director of the British Museum said the scheme, which launched its annual report today, was "ensuring that finds found by ordinary members of the public are rewriting history."
"Many of the most important finds have ended up in museum collections across the country, thanks to the generosity of funding bodies," added MacGregor, who launched the report with culture minister Ed Vaizey.

A total of 8,500 archaeological items have been classified as treasure, which signifies the presence of a precious metal, such as gold or silver according to figures from the British Museum. 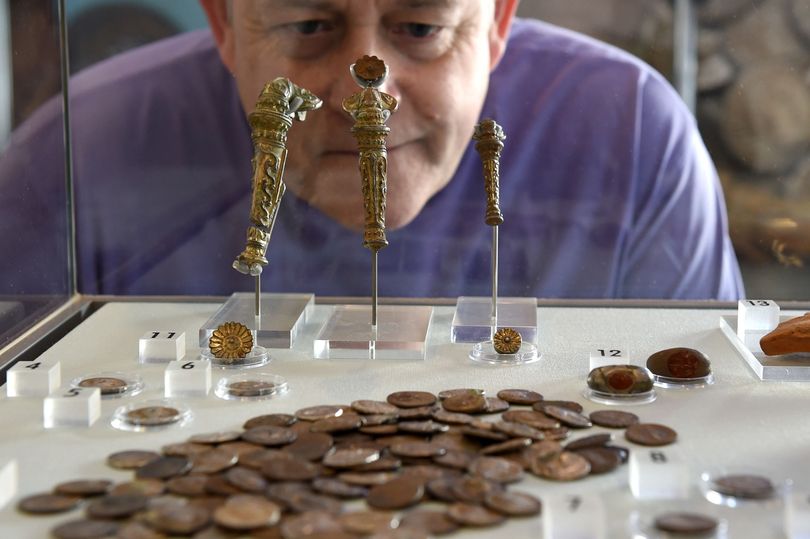 The members and visitors thanked Vanessa Oakden for her talk and some hope to inspect the hoard at her invitation at Congleton Museum where it is currently on display.