On Thursday 12th of April 2018 our members (one of whom is a possible descendant of George Lyon) and visitors were taken by Marianne Howell through a well illustrated and researched talk into a different time and social structure with the tale of George Lyon "called the Upholland Highwayman" and Charles Walmsley the Lord of the Manor of Ince in Makerfield, Wigan.
The talk gave the details of the known facts about George Lyon including the item that for the main robbery of Charles Walmsley's house he sat outside while directing others to do the robbery. Not quite the 'bold robber' he claimed and boasted to be.

It appears George Lyon 'enriched' his tale when he told it to his local fellows and some details such as 'his transportation" are not documented and appear to have no basis from known records. He must have been tolerated as a known local thief and as such there may be a basis for his supposed help to others.

As retold in Wikipedia George Lyon's one major feat as a highwayman was to hold up the Liverpool mail coach. With his accomplices, who have been unknown since, he planned the robbery at the Legs of Man public house in Wigan. They then persuaded the ostler at the Bull's Head Inn in Upholland to lend them horses for a few hours. They held up the Liverpool mail coach at nearby Tawd Vale on the River Tawd, firing two shots and forcing the driver to pull up so that they could rob the passengers. The gang then returned to the Bull's Head, and when the robbed coach later arrived at the inn, Lyon and his accomplices had an alibi as people had seen them in the pub earlier in the afternoon.

George Lyon is said to have held up the Liverpool mail coach by firing shots and forcing the driver to stop. Then, having robbed the travellers, he went swiftly to the pub at Upholland, where he had been drinking earlier. The travellers arrived a little later, bringing with them their tale of robbery and their narrow escape from death, and as Lyon was in the pub both before the robbery and afterwards he was not suspected by the travellers.

The robbery at Ince.

One of George Lyon's accomplices an Edward Ford had been employed redecorating the manor at Ince and as such knew the lay out and what loot could be obtained when the owner and family were absent and only the 'live in staff' were at the  house.

George Lyon and his three accomplices Edward Ford, David Bennett and William Houghton, carried out the burglary at Westwood Hall, Ince, Wigan in April 1815. Lyon was the 'lookout' who stayed outside, and  even is said to have sent one of the others back to try to get more loot, which was in the form of silver items.

The loot was offered for sale in an inn but was both easily recognised and was bought by an undercover fence, thus informing the authorities and allowing the thieves to be caught and tried.
One of the thieves Ford, who it is thought had suggested robbing the house to Lyon, and had himself taken part in some 17 previous robberies, gave evidence against the others and was thus spared the death sentence  given to the other three robbers.

A reproduction of George Lyon's letter (with the aid of the prison chaplain, the Reverend Cowley) to his family at Upholland to send him his suit and boots to wear at his execution was shown and in it the appeal to have his body brought back to Upholland for burial. 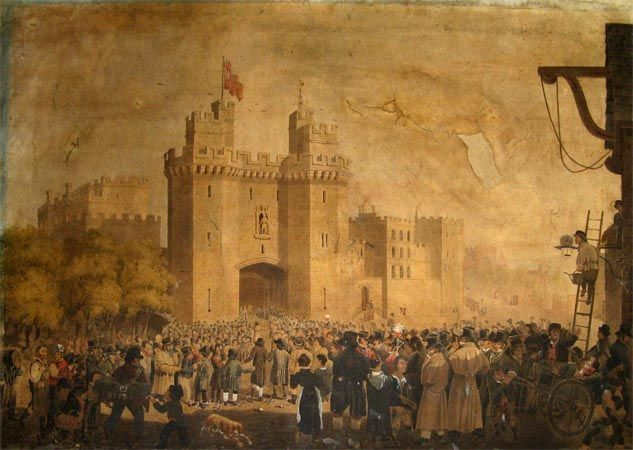 We can surmise the prisoners would arrive to a similar crowd as above after sentence.

The four thieves were tried and sentenced. Edward Ford who it is thought had suggested robbing the house to Lyon, and had himself taken part in some 17 previous robberies, but because he turned King's evidence he was spared the capital sentence.

The execution of Lyon, Houghton, and Bennett, took place in Lancaster before a large crown, entertainment for the onlookers somewhat like a horse race meeting today,  just before noon on Saturday 22 April 1815 for the offence of the burglary at Westwood Hall, Ince, Wigan. 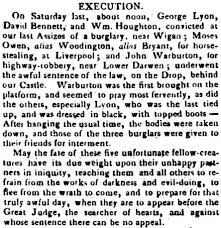 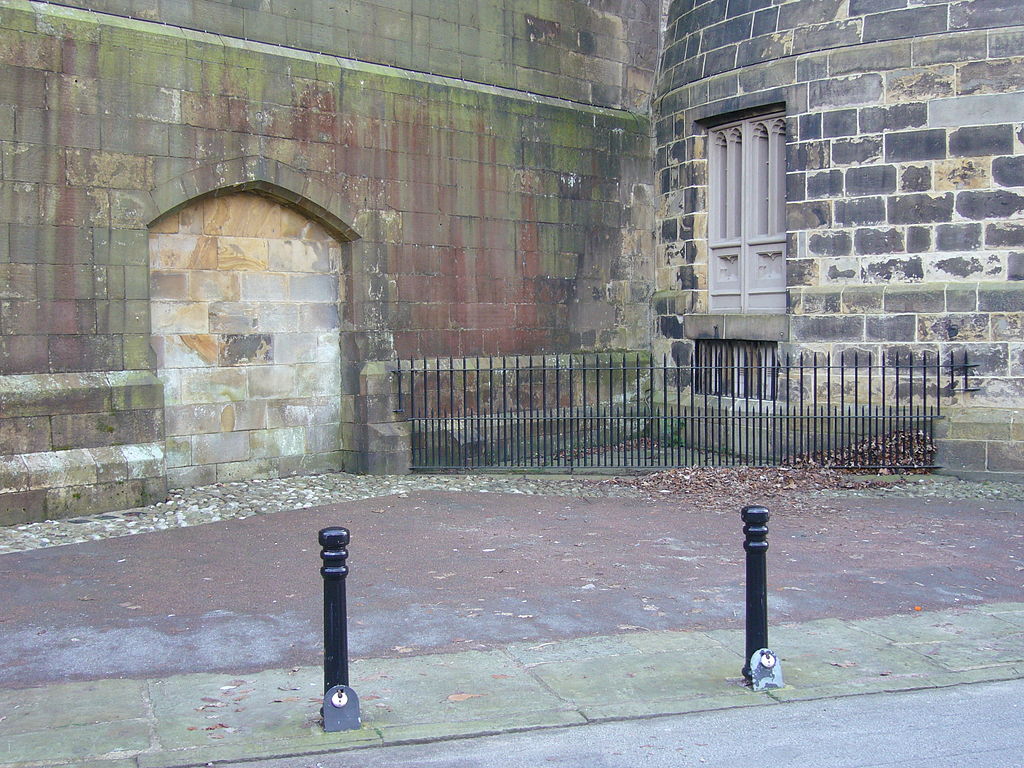 The return of the body to Upholland.

A publican and others carried out George Lyon's wishes to remove the body to Upholland and avoid a possible use of the body for dissection as was the then practice for executed  persons. The trip was undertaken in very bad weather and our speaker illustrated the use of the available then and now maps to show the extra miles taken possible y to avoid a flooded stretch of road. The body return party being followed by many folk, so even at that time George Lyon was a 'celebrity' in his own district.

His body was buried in the same place as his recently deceased daughter and the gravestone  shows her name but not his. Still at the present time this grave is visited by visitors to Upholland  which makes it an unusual present day tourist attraction. 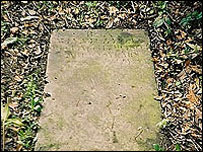 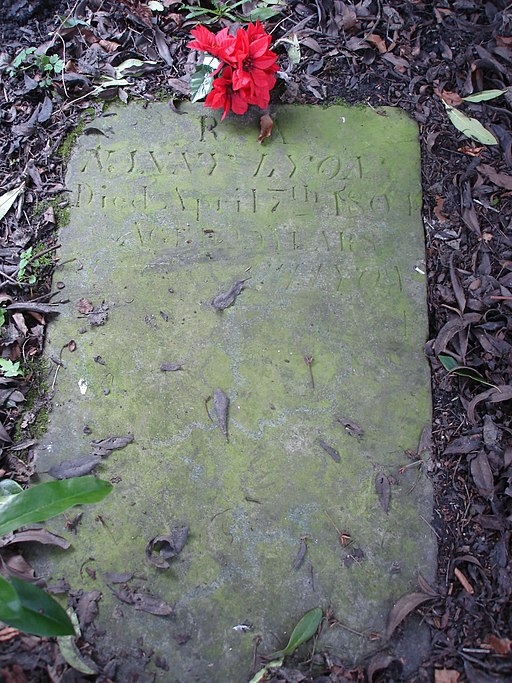 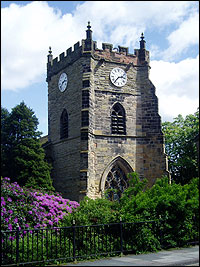 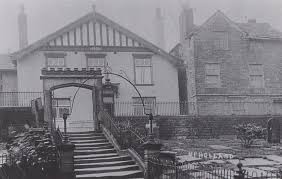 The church at Upholland,   and an old photo of graveyard,  looking to the inn with the grave in middle right of view. the right hand side building reputably haunted.

Note on the gravesite.
Below the level of the roadway, on the extreme western edge of the church burial ground and directly opposite the White Lion Hotel, lies a flat tombstone, with the single name
'Nanny Lyon' inscribed on its surface. This is believed to be the grave of George Lyon, the 'UpHolland, highwayman'.
Photo shows theWhite Lion Hotel and adjacent right hand building viewd from graveyard.

A very different character and lifestyle based on inherited wealth and  the usual social occupations of a gentleman. He was notable for being on the specially selected jury (biased to the status quo) for the Peterloo massacre  trial of the armed persons who in excess of duty carried out the injury and death of folk protesting in Manchester, which avoided any of the Yeomanry or Militia being convicted. The 'Authorities', Gentlemen and wealthy folk were at that time worried that the revolutions on the continent would spread to England and much disturb the status quo.

We were shown a copy of a report of the trial and the jury members selected which included the respectable Charles Walmsley.

Charles Walmsley links indirectly George Lyon to the events of Peterloo and the reformation of voting rights. 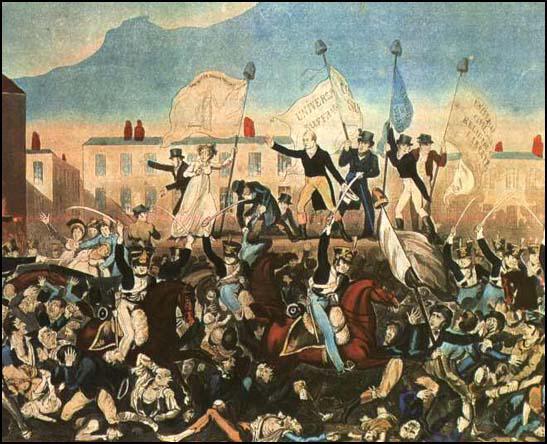 Print of the Peterloo Massacre published by Richard Carlile

While composing this report your webmaster came across an interesting deposit of a unique account of the Peterloo enquiry and trialof Henry Hunt.
The Working Class Movement Library’s copy of the Trial of Henry Hunt.

Not everything about that trial is yet available as handwritten notes by a witness about the other witness's statements are still to be deciphered.
Refer:

Unlocking Ideas Worth Fighting For:
Project to uncover and unlock the unresearched collections of the People's History Museum and Working Class Movement Library
New Peterloo Evidence…Maybe
Posted on February 1, 2013 by unlockideas

I was searching for biographical information on one of the Yeomen present at Peterloo, a small note dropped out of the Working Class Movement Library’s copy of  the Trial of Henry Hunt. Originally the book had belonged to William Hulton, the magistrate who on the 16th August ordered that the crowd be dispersed and ‘the orator’ Hunt arrested. Hulton gave several hours of testimony at the trial (at which Hunt was sentenced to two years in Illchester Gaol), and to discover the magistrate’s very own copy of the proceedings was remarkable.
However, within the Hulton volume of the Trial of Henry Hunt is something more exciting entirely. During Hunt’s trial Hulton took handwritten notes; writing in pencil he minuted the words of other witnesses before his own testimony, and these are bound within the volume. The handwriting is difficult to read and will take a bit of time to decipher, but having emailed a historian specialising in Peterloo it appears that the source of evidence is unknown.
Unquote.

Those interested in democrary and the eventual changes from the Peterloo incident can help by attending the aniversary events in 2019 and help to raise a suitable memorial.
The Peterloo Memorial Campaign has been set up to lobby for a respectful, informative and permanent memorial to this profound event, whose 200th aniversary is on 16th August 2019.
See website http://www.peterloomassacre.org/history.html
Article: website: https://en.wikipedia.org/wiki/Peterloo_Massacre

A copy of the Wigan Heritage Service is available as a PDF from the link:
https://www.wigan.gov.uk/Docs/PDF/Resident/Leisure/Museums-and-archives/archives/Past-Forward/pf31.pdf

Allan  Miller’s  book  on  George  Lyon,  the  Up  Holland  highwayman,  was  featured  in
Past Forward  Number 29. The book proved a great success, and was sold out in a very short time.
The editor of "PastForward" has in Number 31 published an article which Allan Miller has written for Past Forward about George Lyon.

The webmaster is of the opinion the article in PastForward Number 31 is a good summary of the times of George Lyon.

The Historic Society of Lancashire & Cheshire.

Lancashire archives houses the family and estate papers of the Walmsleys in 55 boxes.
Included in. the collection some documents of direct relevance to the burglary.

Further searches for Lancashire can be done on the National Archives.
Link:
http://discovery.nationalarchives.gov.uk/

Peterloo Link: Link to a note on Hunt "The Orator"

Note on the gravesite.
Below the level of the roadway, on the extreme western edge of the church burial ground and directly opposite the White Lion Hotel, lies a flat tombstone, with the single name 'Nanny Lyon' inscribed on its surface. This is believed to be the grave of George Lyon, the 'UpHolland, highwayman'.
Photo

"Hanging Corner" outside Lancaster Castle, site of numerous public executions between the late 18th Century and 1865. The double-doors on the RHS hinged inwards into the "drop room", where condemned prisoners were pinioned immediately prior to execution. Condemned prisoners were led outside onto the wooden gallows platform, which was level with the bottom of the double-doors. The iron railings and bollards are modern additions made in the 20th Century.
By Nabokov at English Wikipedia, CC BY-SA 3.0, https://commons.wikimedia.org/w/index.php?curid=17668801

This watercolour, by an unknown artist, illustrates the arrival at the castle of a gang of poachers. The poachers were caught after a gamekeeper was shot dead on the Fitzherbert Brockholes estates at Claughton near Garstang in 1827.  George Lyon and fellow condemned would probably have create a similar public spectacle but not as large as their hanging .