Warburton, the village and the church was a talk with many illustrations given by Dr Michael Nevell to the group
which told of the surprise, enjoyment, frustration and very considerable time over many years with volunteers to
establish the history of the village of Warburton.

It included the ‘invasion’ of houses to part demolish them to get at the underlying fabric and story of construction
and decoration, including the farms and removal of items from their original place for ‘convenience’ but leaving
tell tale modern coins beneath the structures.

History is not always what you see at first, but needs verification and proof.
A good evening was enjoyed and some bought Dr Nevell’s book, noted below which gives greater detail of our past knowledge.
Some photographs are reproduced below with the very short wikipedia summary.

Dr Nevell's sumary of his talk.

Warburton lies in an ancient landscape, on the border of East Cheshire and Trafford,

Greater Manchester, in North West England. Today it is best known for the busy toll-bridge
that crosses the now dry river bed of the Mersey, and its two parish churches. Warburton
hides a rich landscape history with origins in the late prehistoric and Roman periods.
My talk reviewed 19 years of archaeological and historical investigation in Warburton covering
development of the landscape and village, the archaeology and history of the old church
(one of only 29 medieval timber churches and chapels in England and Wales), the buildings
of the area, and a study of the people of the parish from 1600 to 1900 using the manorial
and probate documents. Archaeology highlights ranged from a Roman coinhoard, through the
medieval church which was also the site of priory, to the 24 surviving timber-framed buildings
in the township and a surviving Tudor wall painting in one of the farms. The survey work at
Warburton provides a detailed record of a rural community on the edge of the great industrial
and social changes of the post-medieval period.

The photograph below of old part of the church is coutesy of Dr Nevell. 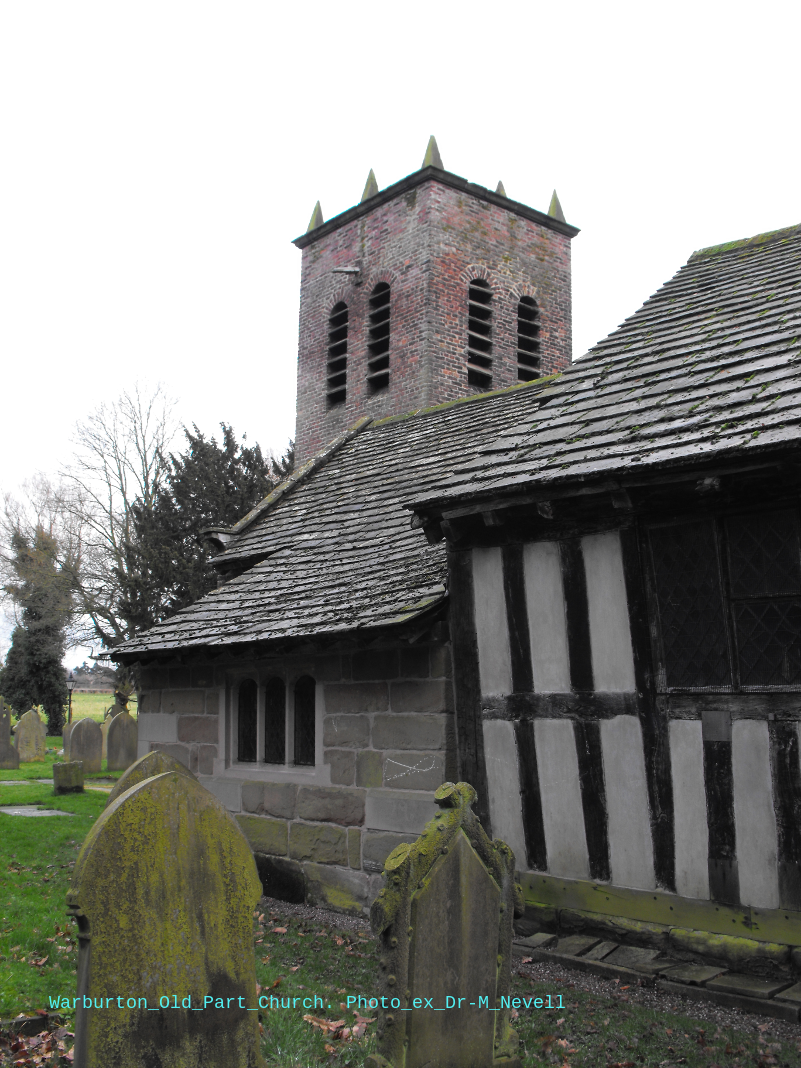 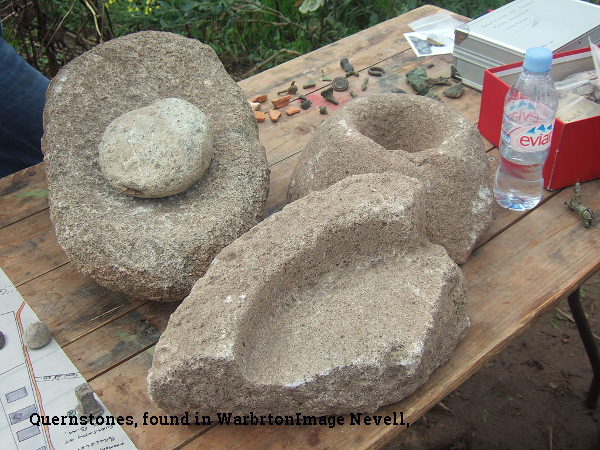 The rich archaeological and historical landscape of Warburton is currently threatened

Birmingham to Manchester. A feeder line is projected to cut across this rural township

from north to south, potentially altering its character permanently. Such threats to the

landscape of Warburton are not new.

The book is on sale from Salford University shop for Ten pounds plus postage £2.50.

The Archaeology and History of a Cheshire Village 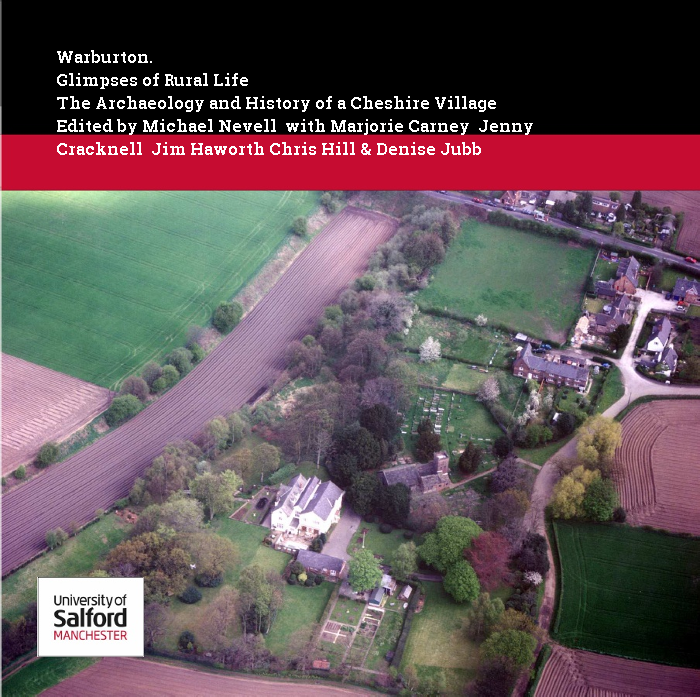 Some limited evidence has been found of activity on the site of Warburton dating from the Bronze Age, through the Iron Age and Roman periods; these include a flint blade, six Mesolithic tools, pieces of quernstone, and a snake bracelet. Archaeological evidence indicates that the area around Warburton has been used agriculturally since at least the Roman times. In the Domesday Book, the name was Warburgtune which name has evolved to today's 'Warburton'. The suffix –ton means a settlement or farmstead in Old English, indicating that the settlement has pre-Conquest origins. It has been suggested that Warburton was the site of an Anglo-Saxon burgh or defended settlement, possibly either called "Toppingburgh" or Weard byrig, established by Aethelflaed, Queen of the Mercians, in 915 during the wars with the Vikings. However, it now seems likely that site lay on the Wales–Cheshire border.

The first documented reference to Warburton occurs in the Domesday Book, where the two manors of Warburton were recorded; the manors were united by the late 12th century. Before the Norman conquest, the area was controlled by the Anglo-Saxon thegn Aelfward. Although the Domesday Book records no church in Warburton, it is possible that the church dedicated to Saint Werburgh is pre-Conquest. The omission of the church may not be significant, as not all pre-Conquest churches or chapels were recorded in the Domesday survey. The first documented evidence of a church in Warburton was in a deed of 1187, when it was a chapel of ease for the parish of Lymm. Warburton became a separate parish in the 13th century. The church is surrounded by a ditch and bank, probably dating to at least the 14th century. Warburton is also the site of a medieval priory, near the Church of St Werburgh; although the priory was only formed in the 13th century, it was dissolved in 1270.

Warburton was predominantly a farming village during the medieval period. The north western corner of the township was used as a deer park. Warburton grew as an agricultural town during the medieval period, and it remained almost untouched by the Industrial Revolution; this is reflected in the population change between 1801 and 1901, dropping from 466 to 403, with little variation at a time when the rest of Trafford was expanding rapidly.

The University also runs a “Greater Manchester Archaeology Day”, which this year it is on Saturday 26Th November Link below: 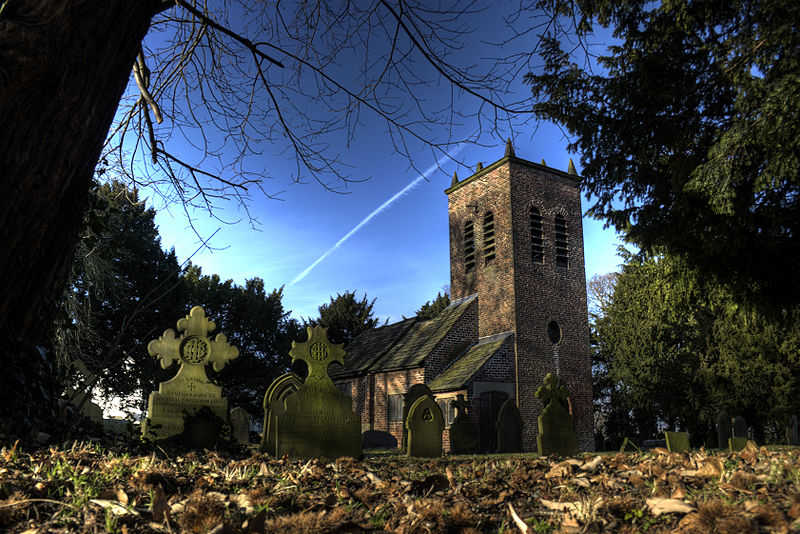 There is a "YouTube" short video on the restoration which was greatly aided by The National Lottery.
https://www.youtube.com/watch?v=Q9ODpPRCUMc

This meeting marked the first of our winter programme and we were able to welcome returning members,
alongside some new ones, to our new venue, the Culcheth Centre on Jackson Avenue.

Peter Solan is a Trustee of the Lion Salt Works and a researcher into its history.

At the start of his presentation he proudly announced that the Lion Salt Works had received a National Lottery award
as it had been voted UK's Best Heritage Project of 2016. (See YouTube link above)
Then using maps and plans Peter explained the geology of the Northwich area and the reasons for the accumulation
of salt bearing strata. He described how the salt brine was lifted and processed, how it differed from rock salt and
explained, in some detail, the development of the works under various members of the Thompson family, until its sale
to the Salt Union in 1888.
Peter had some interesting slides and stories about some of the characters involved in the salt extraction, including
the greed, theft of 'brine' conflicts, deaths by misadventure (!) and the general conflict of early competing firms.
We thank him for his excellent presentation. and would recommend a visit to the site (pay for entry) a part of
West Cheshire Museums. (See contact link above.)

2016 marks the 10th anniversary of the History Group so to round off the meeting and as a special treat to celebrate
this milestone,
We had cake, lots of cake!
[©Zoe Chaddock] 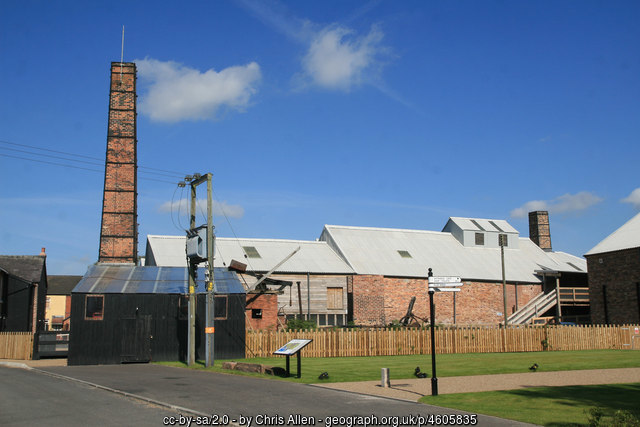 Somme Memorial Display of Those Recorded on Culcheth War Memorial.

During the summer of 2016 a display board was placed in the Culcheth Library (Livewire) showing
photographs of the recorded war graves of three soldiers entered on the war memorial.

This was a timely reminder of the battles that took place at the Somme one hundred years ago.

The display was then shown at the first groups meeting during September 2016.

Below are photographs of the display. 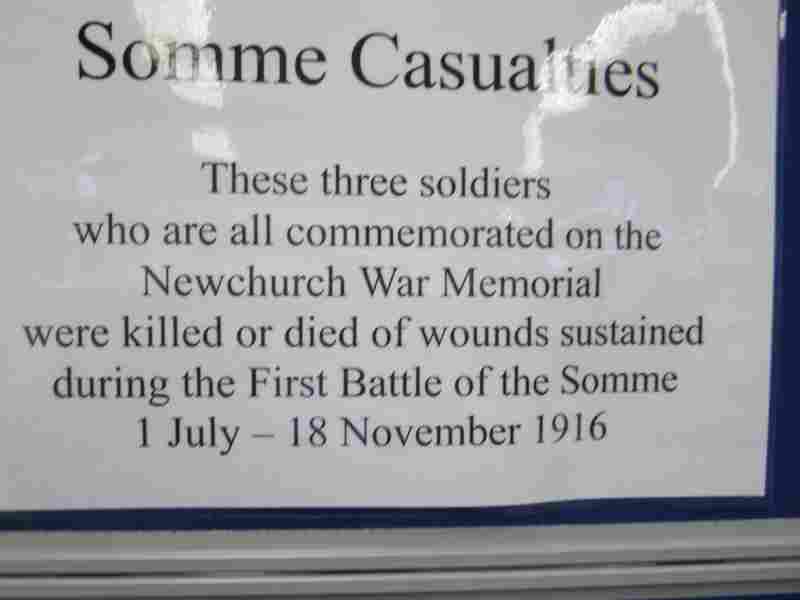 The visitors admire the Greenall Window.

Our visitors are given details of the crypt. 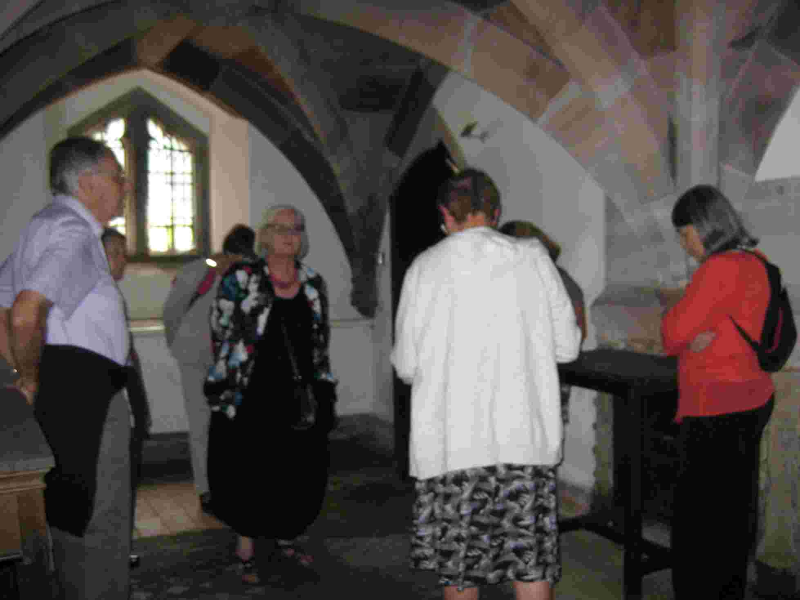 General views under CC by SA licence by others. 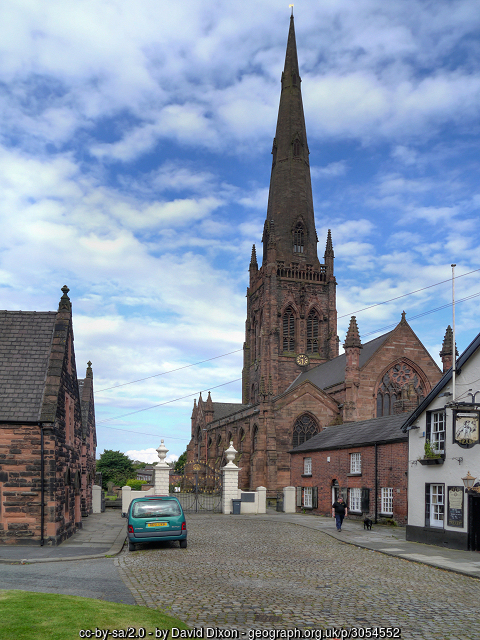 St Elphin's Church, Warrington is the town’s parish church. It has been designated as a
Grade II* listed building (National Heritage List for England).

The gateway to the church dates from the 18th century and is itself Grade II listed (National Heritage
List for England) as are the cobbles and pavement leading to the gateway (National Heritage List for
England). The gateway consists of two stone rusticated gate piers which are surmounted by a cornice
and urns. Between these are two iron gates with a curved iron arch. To the sides are low stone side
walls and small iron side gates for pedestrians.

Most of the fabric of the present church is Victorian, the result of an extensive restoration between 1859
and 1867 although the earliest part of the church is in the chancel and the crypt which survive from an
earlier church built in 1354. That church was badly damaged during the Civil War and following this,
the tower was rebuilt in 1696 and the nave in 1770. The south aisle was added in the early 19th century.
The spire was added during the nineteenth century restoration.

A view from the river. By Colin Park 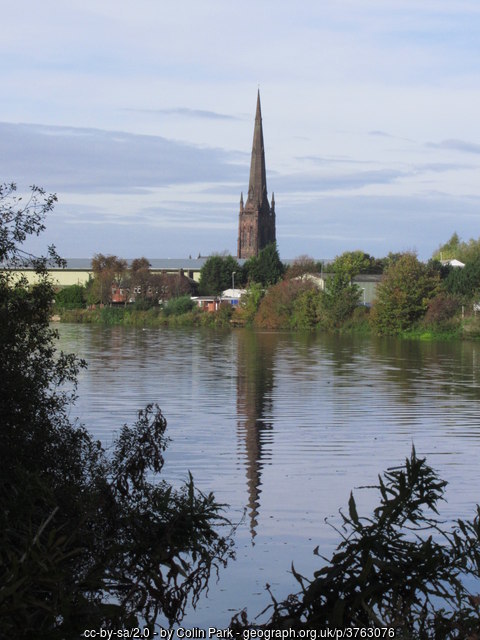 Report on the visit by members to the 14th Centrury St Elphins Church Warrington.

On the afternoon of 17 August 2016 twenty one members of CLHG met at St Elphins Parish Church, Warrington for a guided tour of this ancient church.

We were greeted by Kathryn Hayes, one of the Church Wardens, who, after seating us in pews, proceeded to give us a brief history of St Elphin's from
earliest times to the Victorian re-modelling of the church and later developments.

Miss Hayes explained that there has been a place of worship on the site since the mid 7th century and Domesday records a priest at Warrington. However l
ittle is known of the person to whom the church is dedicated although traditionally Elphin is said to have been a companion of St Oswald and the first priest
to minister on the site. The Parish Church is unique, being the only church in Britain to be thus dedicated.

Our group then separated into two parties, one led by Miss Hayes and other by her colleague Margaret, to tour the church and have its features explained.

We were shown the Lady Chapel, originally endowed by Sir John Boteler, which is now dedicated to the Queen's Lancashire Regiment; St Ann's Chapel
containing monuments to the Massey and Patten families and the Chancel which dates from 1354. We descended into the 14 century crypt and then up
onto the south gallery to view the church laid out beneath us.

Everyone admired the many stained glass windows which looked beautiful in the afternoon sunshine, particularly the Greenall window which faces west
and appeared to glow with colour.

All the group members found the visit both enjoyable and informative and our thanks to the guides. 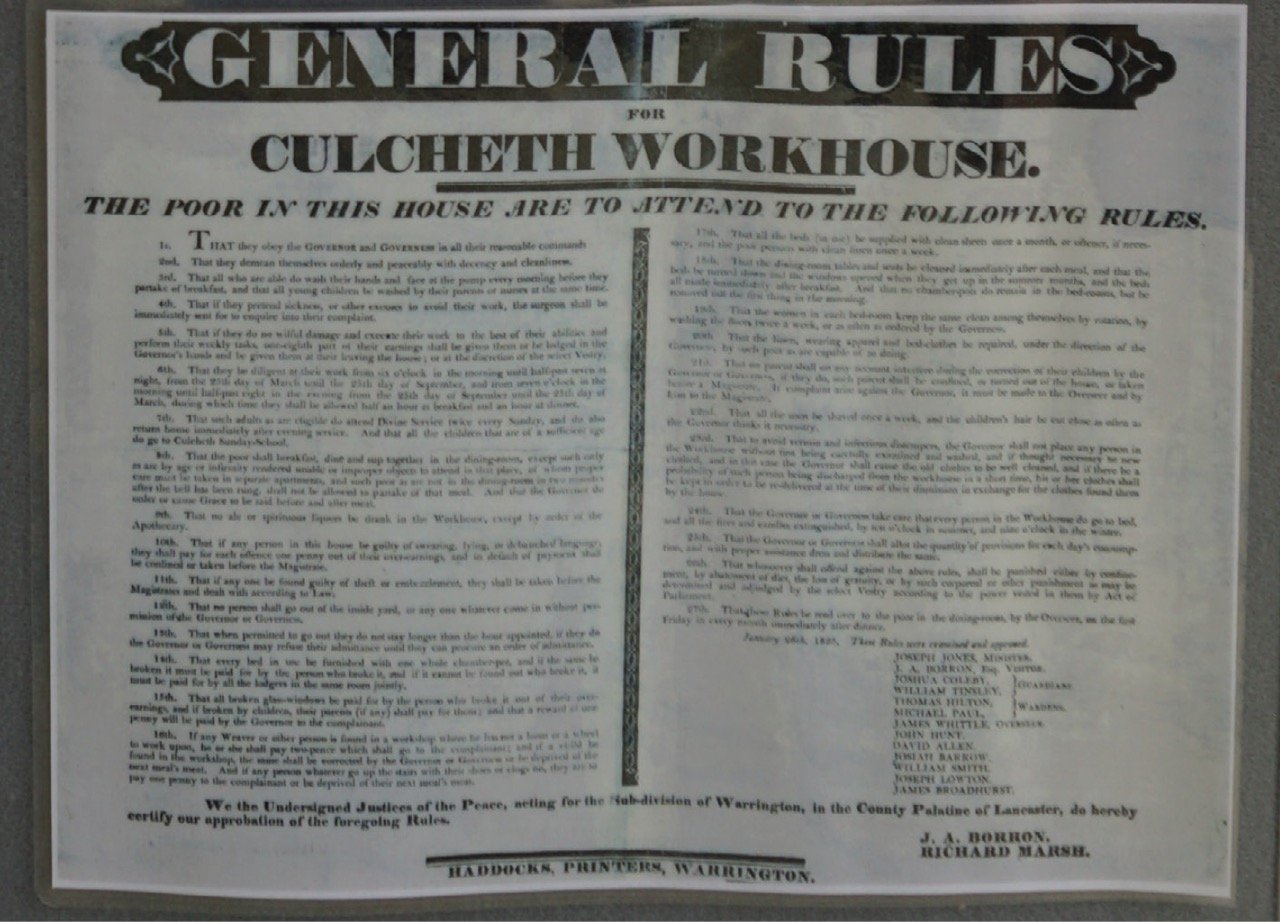